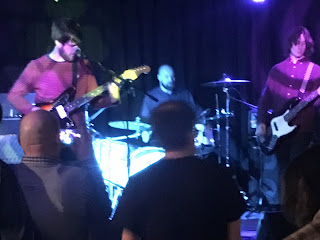 Thursday night saw fellow Manchester blog Music Is My Radar put on their latest night at Aatma. One of our favourites and most-written about bands Déjà Vega headlined the event with an hour-long set of old favourites and some new material that they've been busy away writing in the past few months.

The thing we love about Déjà Vega most is their uncompromising approach to their music, the way they make no concessions to what they should sound like to get signed, get gigs or whatever rewards the music industry in its local and national form demands of bands these days. Their raw confrontational approach, one minute laden with effect-pedal driven cacophony, the next a skeletal bass line or singular sparse drum beat, sets them out on their own path. Other than Jack's effects pedal, their only weapons are those guitars, bass and drums and his voice which often has to fight its way through the wall of sound that they create so impressively.

Songs like Pentagrams, Friends In High Places, The Test and Eyes Of Steel trade though in both the power of the sound they create but also an intricate structure where those two worlds of cacophony and sparsity meet. They're a band that you can't just like, it's all or nothing with them such is the nature of what they do and one look at the crowd losing themselves in the music as the set progresses tells its own story. Déjà Vega are an acquired taste, but once you've got them you can't resist more.