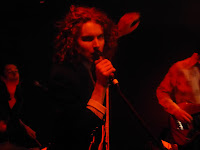 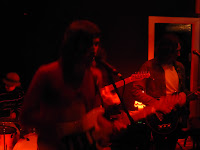 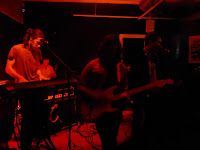 Crimsons headlined the first of their own club nights at Manchester's newest venue Jimmy's on Saturday night. The crowd packed into the intimate downstairs area to witness three exciting but different bands play to an enthralled enthusiastic crowd.

This is the first time we've seen Good Foxy play and we're impressed by the way they fuse rock music with some serious grooves that grab the audience's attention and get the more adventurous ones moving. They suffer from some bad sound issues during the first half of the set (and the sound in Jimmy's is excellent once that's fixed) yet they don't let that faze them at all. They range from employing one vocal to four at different points in their set to great effect and when James pulls out a harmonica in the middle of one song and lets loose with a solo, it feels like they've got everyone in the room in that one moment. They play songs from their self-titled debut album, including the wonderful early single Hi Watt, but also some new material that sounds like a real progression from that impressive first record. 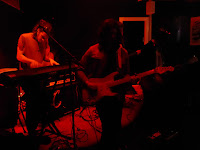 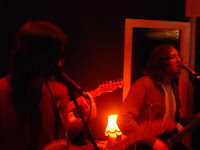 Dantevilles are a band unquestionably on the rise. We've followed their progress for a while now and you can see them getting tighter and tighter with each show, those dual vocals of Connor and Jamie acting as a call and response in some songs and coming together and lifting others. Tellingly, like all bands that have gone on to much bigger and better things, they're dropping new songs into the set all the time that add fuel to the fire that's set to explode for them. Graffiti did that, but even that's usurped by another new one called Patience. Their strength is their immediacy whether it be those new songs that feel like old friends by the time you get to the end or the old favourites such as Perfect Place and It Might Be Tomorrow which still possess the magic they had the first time you heard them. Newly signed, full of confidence and exciting plans afoot, Dantevilles are about to get a whole lot bigger.

It's Crimsons' night though and they deliver in spectacular fashion. It feels like all that latent promise they've demonstrated so far was let out of the bag and set upon us. They sound dark, heavy and deliver some of the filthiest rock and roll we've heard for quite some time including a new song that they've just finished (that they don't tell us the title of yet) that is simply the best thing we've heard from them so far. It feels like a spectacular step up for them and talking to others who've followed their path for a while, it's a feeling that's very much shared. 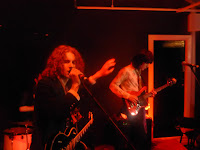 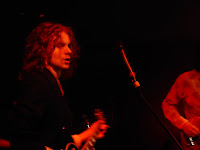 Confidence bordering on a knowing arrogance flows from the stage as they hold the audience rapt in their spell, either dancing or simply breathing in the music as they strut their way through a powerful set whilst retaining their studied cool. The sound set up means you can hear the intricate details in the songs, the They've come a long long way since we first saw them last June as recent single Idle Ways demonstrates so well towards the end of their set. The acclaim they get at the end as people's hearts start to beat at normal pace again tells its own story.