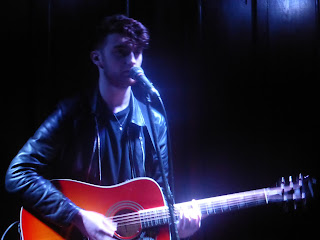 After a period of relative radio silence from Lunar as they wrestle with line-up changes and recruiting a new drummer, lead singer Sam and guitarist Luke ventured out for an acoustic set opening for Howie Payne on Wednesday night in The Castle.  Showcasing a couple of new songs as well as some of the songs that have made their name as one of the most exciting new bands in town, they demonstrated that there's another side to their craft with a well-received half-hour show.

The sign for us of a good band, one with real songwriting potential, is the versatility of the songs and tonight's set is proof that Lunar have that. Eight songs whose full band live approach varies from full on radio-friendly crowd pleasers to something more reflective all make the transition to the acoustic format and display a richness and depth to them that is down to the inherent strength of the songs. Whether it be Lunar's three singles to date - Our Way, Showboater and Gonna Get You Down - or the new songs that are unveiled for the first time tonight, Runaway and Tomorrow If You're Lucky, they all pass that test with flying colours. 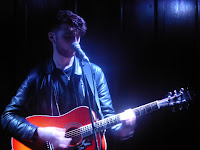 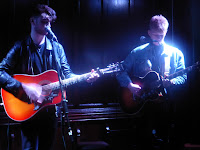 Whilst Sam's voice needs to be up in the mix when playing with the band, the stripped-down format allows us to hear the emotion and warmth in these songs and in his intonation in his voice over which he nowadays has far more control than he did as Lunar set off on their journey eighteen months ago. He's also developed as a guitar player, there's points in the first few songs where he plays solo that it feels like this is a big artist playing a secret pub gig such is the confidence and ease with which he delivers Girl At Home and Tomorrow.  When he combines with Luke, the two of them have a natural bond, at points in harmony and at others providing a contrast. The second of the new songs Runaway is a lovestruck impassioned plea to do just that and is possibly the best thing they've done so far whilst Showboater loses little of that innocent teen turning into adult charm that makes it such a fan favourite.

In a world where a few months off can break a band such is the fad nature of some parts of the music business these days, it's good to hear that Lunar are still alive and very much kicking and with a new drummer on board and new songs of this quality, then the future still looks very bright.