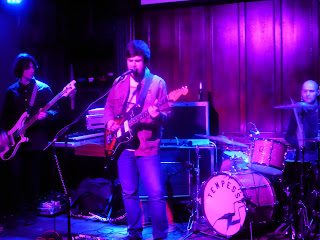 Nothing says graveyard shift like the opening slot on a Monday night in a small venue. But not when you're Déjà Vega.

There's something thrilling about watching this band. Unflinchingly uncompromising in their approach their gigs feel like a jam session in parts, one where the three participants are joined by an invisible binding force. No two performances of a song are ever the same as Jack smacks the pedals with his feet letting loose all sorts of distorted effects, while Mike nonchantly delivers deep bass lines that can almost unnoticably change the direction of the song as Jack's guitar and Tom's drums fight a thrilling running battle. 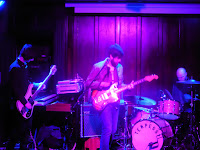 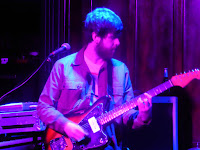 Restricted to half an hour tonight we only get six songs but that's more than enough to sate the growing crowd. Friends In High Places shows that they might be capable of crafting something that the risk averse world of radio just might cock their ear to as does a new song that channels their spirit and ferocity without diluting it which is no mean feat.

They finish with two older songs - Pentagrams and The Test - and their magic means that it still feels like the first time they've played them and the first we've heard them. The latter in particular has the thrill of anticipation as to where they'll take the song, is an up or a down coming next and when they'll hit the final self-destruct button that will bring it all to an end.