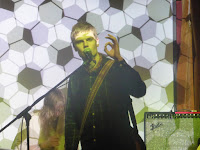 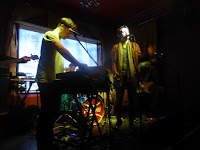 Iceland's Fufanu came to Manchester for the opening night of their UK tour in support of their recent second album Sports and entertained a Valentine's Night crowd with a high-energy enthusiastic performance and a natural charm that won over our hearts and minds. Support came from the impressive Pines.

It feels like Gullivers is too small a stage for the ambition that Pines have for their music. They make no apologies for the scale of what they're trying to create, huge heartfelt anthems dripping with emotion and honesty that it's difficult not to be affected by.  By the time they hit their third song, recent single Kings, they've shaken off some initial sound problems that meant we couldn't hear Chris's vocals properly. The single is a good marker for them - they make clever use of the other vocalists in the band to build the songs and add the necessary light and shade to them to deliver the desired effect. 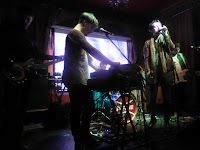 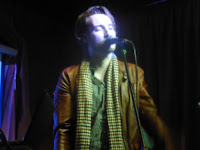 Majestic is just that whilst All In Your Own Mind is probably the stand out track of the set, although it's pushed close by their final song Redemption. Their set is accompanied by video images on the screen behind them which add to the effect of the songs rather than distract from them, particularly the scenes around Manchester. They manage to stay the right side of that line that divides those that deal in empty platitudes where emotion should be and those that have the ability to twist and tug at the heartstrings with an unwavering honesty.

They are the polar opposite of Fufanu in many respects. A long intro tape accompanied by eye-catching graphics based around the Icelandic flag, the Sports logo from their album and their name suggests that we might be in for quite a show and that proved quite prophetic. 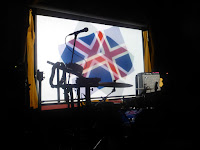 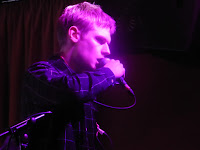 Front man Kaktus is a bundle of eccentric energy, at one point doing a star jump so high he nearly takes out one of his band mates in the head, but for the rest of the set engaging with a largely static crowd and delivering a fast frenetic vocal performance in keeping with the sounds his band mates are creating round him. They dismiss out of hand any of the post-punk descriptions we'd read about them, the electronic influences themselves doing that for them and what they do deliver is a set that touches so many camps but never sits down in any of them. The natural energy in their performance transmits to the sounds they're making too - at points almost pop, at others with much darker sinister edges, but never ever far away from the next twist. 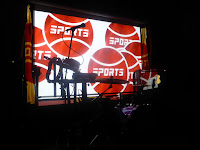 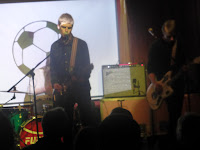 The set pulls heavily, as you'd expect, from Sports, although the set-closing Now comes from their now-deleted debut Few More Days To Go. The title track itself sets the bar high - six minutes that mixes highly infectious grooves that spring out of the ether with something a little harder edged and all lightened up by the projections on the screen. The hour long set passes by in what seems like a flash and we're left wanting more even after an impromptu two-song encore.

Fufanu sound like no one else around at that moment, immune to convention, imbued with that slightly off-kilter approach to music that characterises many of their fellow countrymen and women, and with enough nous and tunes within their armoury to have us leaving the room buzzing about what we'd just witnessed.