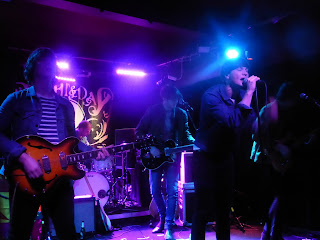 After a quiet year in 2016 spent recording their debut album which should form a large part of tonight's setlist, Neon Waltz made their long-awaited return to Manchester.

"We've come from a long way way away" Jordan tells us at the end of opening track Strung Up as if John O'Groats is another world away, yet there's so much at the core of what Neon Waltz do that makes Manchester feel like a spiritual second home. Their natural assured charm and their evident self-belief in what they're doing go hand in hand with a sound that, despite them being a six-piece, never feels cluttered but cut through with a soaring ambition. Perfect Frame is a case in point as are the final quartet of Sombre Fayre, singles Bare Wood Aisles and Dreamers and the set-closing Bring Me To Light. The new album tracks You And Me and Folklore follow the same modus operandi but with something new at each turn whilst Heavy Heartless, invigorated and with a soaring undercurrent that lifts the whole room with it. 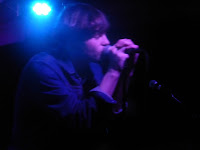 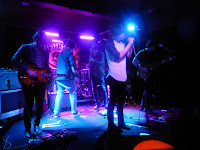 There's even an acoustic I'm Alseep half way through where Jordan just about manages to silence an air-playing gentleman who's spent the evening hitting people in the face with his own guitar strung across his shoulder by telling him it's their encore. They're joined by Bill Ryder-Jones on Something Like You after chiding him for not being tuned up for his guest appearance as they tease us with a snippet of This Charming Man.

By the end of the night Neon Waltz have convinced the believers that this unconventional six-piece that they're about to drop one of the year's best album and won over the curious with songs that are full of warmth and which tug at the emotions and, crucially in a world of increasingly identikit bands, are not afraid to be different.

Neon Waltz played Strung Up, Perfect Frame, You And Me, Folklore, Heavy Heartless, I Fall Asleep, Something Like You, Sombre Fayre, Barewood Aisles, Dreamers and Bring Me To Light