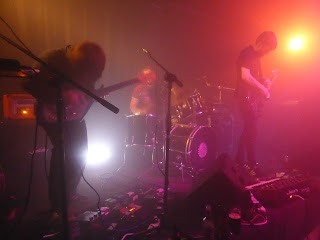 The Lucid Dream's hometown gig at The Source Collective sold out in minutes and felt like a coming together of kindred spirits from across the land to celebrate a band like no other. They made the eighty minutes they were on stage feel like a lifetime lost in a magical musical world of their making.

There's quite a partisan element to the crowd with chants of "blue and white army" and "here's to you, Marky Emmerson, Carlisle loves you more than you could know" to the tune of Mrs Robinson, although there's a sizable element of us who've travelled from further afield to capture this special show for them. The venue they've selected couldn't be better either - The Source Collective's music room is a revelation hidden away down a corridor of the arts centre, which itself is hidden away on a housing estate at the back of the railway station.

They open their set with Mona Lisa, the eight minute instrumental that opens up their self-titled second album and it's the perfect starter, swirling guitars colliding with an insistent powerful rhythm section that sets the pulses racing from the off. The reaction at the end of the song tells its own story as Mark exclaims "we've got to play in London next" to the hordes that have just lost themselves in the magnificent cacophony that has just unfolded about them.

They don't pause for breath throughout the hour and twenty minute set that touches most bases from their three albums to date. Bad Texan, the lead track from last year's Compulsion Songs, follows on and feels somewhat triumphant against the odds, proudly defiant and in your face and that sums up so much of what is brilliant about The Lucid Dream.  Cold Killer and Darkest Day make no apologies for their utter refusal to compromise as strobes flicker and the smoke machine make the atmosphere in the room even denser and foreboding through which the band become the enlightenment. Any hint of traditional song structures are thrown out of the window and binned for something more primal, natural and real.

I'm A Star In My Own Right shows that they're not afraid to tear up their own rule book either, a mesmerising claustrophobic drone with kaleidoscopic sonic effects that swirl around the room and tie everyone up in its wake. It's a contrast to the short sharp shock therapy of 21st Century that follows it.

After forty minutes they inform us that they've only got two songs left, which for most bands would leave us feeling short-changed, but when those two songs are Nadir and Epitaph, the two songs that close Compulsion Songs and they last twenty minutes between them and take us on a journey through the darkest recesses of their creative processes, then it leaves us almost sated as the night ascends into a beautiful outer-worldly space that few bands can transport an audience to. It shouldn't make sense, something this counter to any written down rules of song, but here, in their hometown, it feels perfect.

There's no way we're going to let them go though and they come back for an encore and delight us with songs from their debut album Songs Of Lies And Deceit that they haven't played for four years. Sweet Hold On Me and Hows Your Low When Your Low Alone? delight both those that have travelled as well as the local faithful, a real treat and also proof that The Lucid Dream haven't just sprung out of nowhere. The Night And Day recently called them psych veterans, they're far removed from the former and way too young to be the latter. They are though an absolutely unique proposition, a live band that eschews convention and makes their own rules in the most spectacular way imaginable.