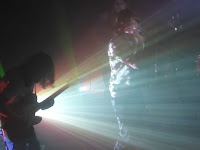 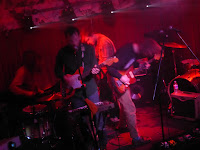 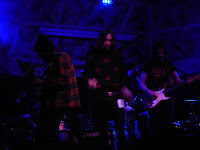 The Vryll Society made a triumphant return to Manchester on Thursday night following last year's dual headliner with Hidden Charms at Gorilla. Throwing off front man Mike's throat infection that could have pulled the gig, they deliver a spellbinding set supported ably by Sweden-via-London's Francobollo and Manchester's own Purple Heart Parade.

This is the first time we've seen Purple Heart Parade since their line-up changes last year, but the magic about this band is that they feel like more than the sum of the individuals within it, like Purple Heart Parade is a living machine, fuelled by people's energy, but with a personality, purpose and momentum of its own. At the core of it is front man Peter Cowap, a man seemingly oblivious to the rules of what a band leader should do, but wired in to the control panel of his partners in crime. Whilst the likes of Starfucker Blues and The Room chime around the ornate music room, he's down on his knees, on stage or amongst the growing crowd, lost in a world of his own created by walls of maxed-out guitar and bass and punishing drums. Unashamed, undaunted and unique, Purple Heart Parade's twenty minutes are short but bittersweet. 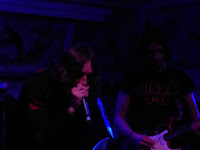 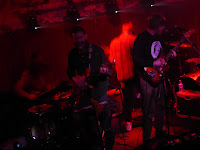 Francobollo is a name that had been touted to us by one of their managers who we met years ago when we still lived in London, but it's probably four years since then and this is the first time we've had chance to see them. The four-piece deliver a set that never stands still, their songs are like bundles of unstoppable energy once released, always restless, moving from one section to the next without looking back which means that they can sound fractured in points, but they never lose control of them so that's never an issue. It's augmented by the good-natured banter and rapport they build with the audience throughout even through a very strange recorded string interlude before their final song whilst they tune up. New single Good Times is a real stand out track, but there's plenty more infectious songs where that came from.

In a different time and place The Vryll Society would be hailed as the saviours of rock and roll. A deliberately overpowering light show creates an atmosphere from which they can lift the crowd up and take them to a different place, lost in a whirlpool of crashing guitars and psychedelic effects that either has the audience standing in awe or those down the front losing themselves wholly to the music. There's no sign of the throat problems that Mike warns us about at the start. He's the perfect front man, the cocksure arrogance of Ian Brown when the Roses were at their album release peak, totally atuned to and lifted by the sonic dreamscapes that his band are creating for him. 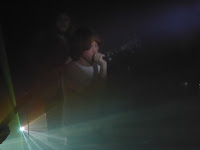 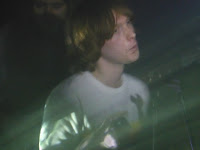 Whether it be the songs they've already unleashed on us - Coshh, Beautiful Faces, Deep Blue Skies, La Jetee - or those still to come including the forthcoming single Sacred Flight which is sure to win them even more admirers with its cloudbusting, transcendental uplifting power, the effect is the same. As they write and record their debut album, the likes of Andre Rublev, Shadow Of Waves and When The Air Is Hot show that they're still expanding their minds with the aim of doing the same to ours. This is music to lose yourself to, to immerse yourself in and let it wash around and over you. There's no big showy front man moves, no axe-grinding hyperbole from the band, they let their music do their talking for them and it's a tale that you have to listen to.