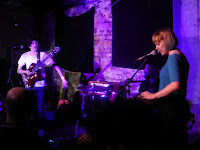 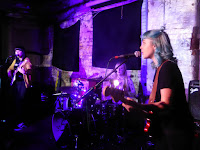 There's something refreshing and special about Peaness. Ignore the name and the obvious puns for now, and one cad seems to spend the whole night shouting about how much he loves them, but they're a band that clearly delight in what they're doing and that transmits very much to their audience too.

Their songs pull no punches though - short, sharp shocks to the system.  There's no pretence, no staged moves, no big dramas. Whilst they might not mess around in the direct lyrics that Jess and Balla interchange delivering, they do it with a grin on their face and knowing glances at each other that give away that they're enjoying it as much as we are and drummer Rach seems to have a permanent smile etched on hers.

However the likes of It's Not My Problem, the forthcoming double A-side singles Same Place and Seafoam Islands and a new one called Ugly Food Waste take aim at the jugular with loose stop-start angular structures that mark out bands that are not studied posing musicians but who have a natural ability to craft something a little bit special. And Peaness are certainly that. 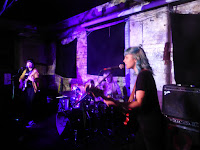 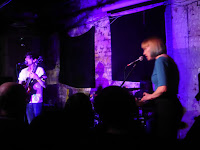 Cowtown take matters much more seriously as part of a thriving growing Leeds scene, but they still have a sharp sense of humour to go with their two minute assaults on our senses. Brilliantly frenetic songs such as Monotone Face and Clock In and recent single Emojicore from their recent album Paranormal Romance are mixed in with some crazy thirty second snippets like Captain Planet and a Devo cover to ensure that they never once lose our attention.

Vocals are shared between Jonathan and Hilary and the contrast between the two simply heightens their impact as keyboards and guitars collide with David's drumming which provides the solid structures from which those two can cut loose propelling the songs' unstoppable momentum.  They're not bereft of humour too, Jonathan has a bee in his bonnet about Oasis which he lets us know about, but no one in the room seems to mind as Cowtown are cut from a very different cloth for a very different audience to the Gallaghers.