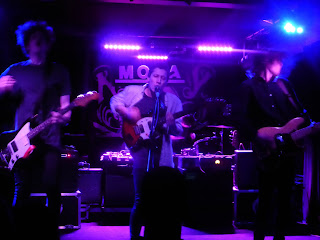 It's one of life's mysteries why October Drift are not much bigger than they are. One of the most visually thrilling live bands around, never standing still for a minute, either lost in the music or seeking to engage with and in the crowd, they brought their ever increasingly powerful live show to Manchester's Night And Day on a cold January night and swept away the cobwebs of the post-Christmas gig slowdown.

Just when you think October Drift can't get any more spectacular they surprise you. Last year saw them rocking the pulpit of St Philips Church in Salford with The Slow Readers Club and then later absolutely slaughter the rather un-gig like surroundings of Dive Bar with a set that still has people talking about it. Tonight they're in more traditional territory in Even The Stars' second home The Night And Day supporting American rock band Mona.

Playing to an audience that's not theirs save for what's becoming a familiar hardcore support in Manchester for them these days, they take the fight to the audience. Daniel's on the barriers at the front of the stage in the first song and Kiran goes walkabout at the start of another, snaking his way through the packed crowd to the back and then returning through us before he even gets to the first verse of the song. As songs reach the breakdown, they let loose so wildly you wonder how they manage to retain control of what they're playing, but they do and it's utterly enthralling to watch them simply detach from their environment and lose themselves in what they're doing - a real contrast to so many dour, too cool to immerse themselves bands that are strutting stages these days. 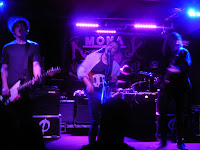 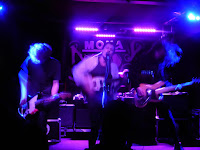 None of this would work of course if they didn't have the songs, and with an impressive array of singles behind them already, the likes of Cinnamon Girl, Get With The Times, Losing My Touch and Robots are expansive songs that has the Night And Day bursting at the seams such is the power that they generate. Whilst making no concessions to taming their performance, their songs scream out to be heard and sung back to them by thousands and one day that might happen given the reception they get at the end has probably added more people to their growing ground swell of support.