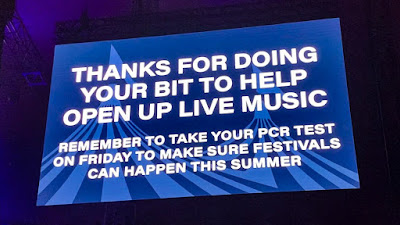 Live music returned at the weekend with Blossoms headlining a 5,000 capacity tent in Sefton Park in Liverpool alongside local heroine Zuzu and Wigan's up-and-coming The Lathums. Our friends Maarit and Harriet from the At Most One Tour Twitter account were among them and give a fan's eye perspective on the most important live show of the year.

It shouldn’t have ended here. It should’ve been at Manchester Arena, but instead the tour is in the heart of the south by the sea. It feels unjust. The Foolish Loving Spaces era was only getting started.

The band’s wearing their finest suits and playing the best they’ve ever played. The night feels fragile and bittersweet. Everything lingers. The eyes watching the crowd from the stage. People in the venue after the lights are on. Us on the freezing streets. All farewells should be sudden when forever, Lord Byron said. This is a farewell, but no one wants to be the first to turn their back, and we then know it won’t be forever. It’ll just be ages till we see each other again.

It only becomes real when the Big Top appears from behind the trees. We stand still for five minutes just staring at it. A steady flow of people heads towards the gates and everyone parks themselves in small scattered groups around the grass. We catch up with two ticketless lads that have arrived with folding chairs and a bag-for-life full of drinks. The media tries to chase the excited punters for comments but it’s all in vain when the gates open and no one wants to spend a single extra minute on the Covid side of things.

Liverpool is, of course, the perfect city to hold such a historic event. It’s internationally known for its generation-defining pop history and the adopted second city of the band. All three of Blossoms’ studio releases have been recorded at the iconic Parr Street Studios. This must be the place.

Our first stop is the portable toilets. How can you miss the smell of that blue liquid they use? We don’t know but apparently you can. This time there actually is some sanitizer in the dispensers.

It was reassuring to know that everybody within the walls of the event, from the ticket holders to the food stall workers, had produced evidence of a negative Covid-19 test upon entry. The test was non-negotiable and, in our opinion, a relatively simple sacrifice to make to assure the safety of fellow attendees.

Zuzu has the honour of being the first artist to play to an unrestricted crowd in The UK. The roar as she takes to the stage with the band is outrageous. It’s a well-deserved slot on home territory for her, being the talent that she is with the stage presence to match the gravity of the day.

Zuzu’s song ends and a wall of sound hits us. Arms up, a sea of shadows against the blinding flood lights. We scream and hug, and forget the silence that’s surrounded us for a year inside four walls.

A couple asks if they could sit on our table. Two minutes later we’re all in stitches, howling at a joke. The same scenes happen everywhere around us for six hours. We’ve never seen this many smiles and this many new friends being made. In our shared isolation we never forgot how to be human.

The Lathums are next and judging by the reaction from the crowd, they could be going to big places. There is an awful lot of chatter from the congregation not out of disrespect, but out of sheer excitement and need to connect again with strangers in a crowd. 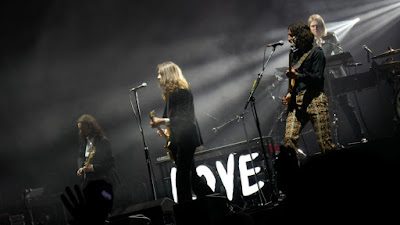 The lights are out. “We’re going to see Blossoms,” one of us whispers. “Holy shit.” Right on the beat to the cowbells of Your Girlfriend, a pint hits someone behind us. There are cold droplets of dark fruits running down our hair and over our faces and we burst into a manic laughter. The sweet smell of home.

It is hard to imagine another band more deserving of the headline slot than Blossoms. Their Foolish Loving Spaces tour was brutally cut short in March 2020, when the first UK lockdown was implemented and they have been prolific throughout lockdown, keeping us all sane. We admit, after over a hundred Blossoms shows, to have never seen a crowd react like this to the band. Not at Castlefield Bowl, not at Liverpool Olympia and not even at The Ritz. There’s love for music and life dripping down the walls.

“This is a massive, colossal ray of sunshine.” Tom says. Isn’t it though? It’s the first day of the spring after the longest of winters. It’s us breaking the surface for that first breath of air after sinking too deep.

During If You Think This Is Real Life it’s impossible not to gaze around at lads on shoulders and girls starting mosh pits and think ‘Yep. Exactly!’ especially when Tom bellows the accidentally prophetic line, “I thought I’d see the world, but I stay in watching the news at night I think about you.” This is a tent full of lockdown stories, many of them miserable accounts from students stuck in lonely halls, parents balancing working from home with full time childcare and especially from those of us on the frontline witnessing the struggle first-hand. It feels, if only for a few hours, that the wounds from the past year have been bandaged up by being allowed to sing and dance with strangers for a night.

“More importantly, do you have two more in you?” Look at us. Look at these 5,000 beaming souls in front of you. We always have two more in us. Hell, we’ve all got all that pent up, suppressed love and energy for a million more songs in us. We start with these two, At Most a Kiss and Charlemagne, and they send us all shooting for the top of the tent and to the stars.

The huge effort from Festival Republic, Culture Liverpool and everyone involved to pull this off was clear and will be an example to the rest of the industry. Every detail was considered and implemented without a hitch, from the logistics of queuing for the loos to the onscreen reminders that it is okay to wear a mask and request space if it makes you feel more comfortable. There’s a reminder for the festival goers to return their second PCR test on Friday (7th May) so the data can be used to hopefully allow more events to happen this summer.

It’s a sharp jolt back to our temporary reality the very moment we exit the gates. The stewards gently remind punters to adhere to social distancing regulations on the way home. The importance of getting safely ‘back to normal’ is impossible to underestimate. We need live events back. We need festivals. They are the spaces we forge our community in, birth friendships in and celebrate how rich and renown The UK’s music culture is.

Melvin Benn was quoted as saying “The audience can feel like they are in 2019 again.” We disagree. It feels like 2021 and a new era where we’ll never take gigs for granted ever again.

At Most One Tour can be found on Twitter.

Email ThisBlogThis!Share to TwitterShare to FacebookShare to Pinterest
Labels: Blossoms, The Lathums, Zuzu