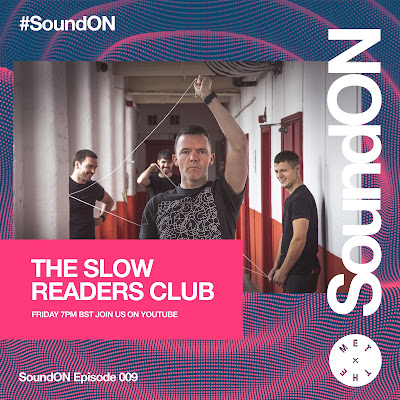 The Slow Readers Club's SoundON session was a homecoming of sorts, returning to the Derby Hall in Bury Met, which also hosts the Edwin Street studios where they recorded their albums Cavalcade, Build A Tower and 91 Days In Isolation. Featuring seven songs that felt like a mini Greatest Hits set and showcasing a harder edge to their sound without losing their uplifting melodies, they whet the appetite for their long-delayed return to the live arena.

Playing in the round on the floor of the venue makes for a far more intimate experience than the band's two live streams from the same room, allowing for camera angles that capture close-ups which augment the feeling of being in the room with them, in particular the expressions on Aaron's face as he relives the words he's singing. The powerful lighting, courtesy of Ash Ennever who works with them on tour, and crystal clear sound from their producer Phil Bulleyment, makes this one of the most realistic live streams we've seen over the past twelve months.

The set is a mix of tracks from their first top 20 album Build A Tower - singles Lunatic and You Opened Up My Heart reminding us just why that album was destined to give them their long-awaited and well-deserved breakthrough with soaring, exultant choruses - and 2020's top ten The Joy Of The Return and its impromptu follow-up 91 Days In Isolation. All I Hear and No Surprise boast that harder edge that we mentioned in the introduction and really benefit from casting off the production that stifles them on record in comparison to these bold, confident and powerful performances.

The set's bookends - Everything I Own and Two Minutes Hate - written in isolation and brought to the studio were born with that muscular punch and here they live up to that reputation that precedes them. More promising for the future direction of the band is Like I Wanted To, which marks a return to their ability to rip at the emotions, and showcase the range in Aaron's voice, without the foot on the accelerator as they did on the likes of Don't Mind and Block Out The Sun. The Slow Readers Club though ultimately are a band, greater than the simple sum of their parts and this SoundON video is a timely reminder of that.

The Slow Readers Club played Everything I Own, Lunatic, All I Hear, No Surprise, You Opened Up My Heart, Like I Wanted To and Two Minutes Hate.