TRACK OF THE DAY : Martyn Walsh And Simon Lyon - Afterglow 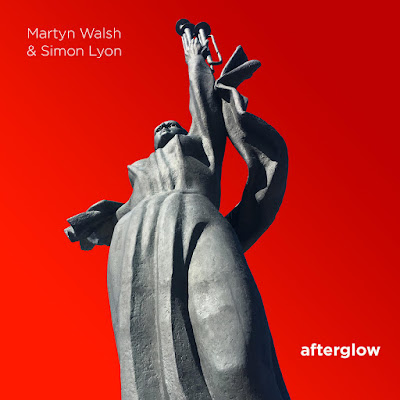 Not content with his roles as a living legend, a figurehead of Manchester's music scene and the creative industries guru in residence for British Libraries, Inspiral Carpets bassist Martyn Walsh has been busy over the past year creating new music. The Afterglow EP is his collaboration with Simon Lyon and his second new release, following on from his ¡La Ruta! project at the end of last year.

Last year's lockdown Twitter listening parties inspired Martyn to reflect on the remixes the Inspiral Carpets released and he hooked up remotely with old friend and Andrew Weatherall collaborator Sean Johnston. Andrew Weatherall was a big influence on the Inspirals, especially Martyn and Craig Gill - the pair wanted him to remix their material. Sadly that never happened but when reflecting on these times, Martyn and Simon decided they should work together.

They shared their ideas during lockdown, uploading the fruits of their labour to their WhatsApp group. The partnership was rewarded with the release of the ¡La Ruta! EP on which Walsh's unmistakable bass plays in important role, especially on lead track Deja Vu Day where the influence of Weatherall is also present. This new way of working was one which suited Martyn. He hopes to produce more music with Johnstone in the future and his creative juices have continues to flow with this latest offering - the five-track Afterglow EP - recorded with Simon Lyon, another friend and collaborator.

Having previously worked together on remix projects, the pair decided to take their partnership to the next level and produce music from scratch. Afterglow sees the duo drawing on their love and influences of techno, post punk, Motown, and electronica. Their creations have found a home in Berlin, courtesy of Mark Reeder's MFS record label.

The original mix of the song is a pounding floor filler, whilst the Sink Ya Teeth mix sounds massive – a Euro/Industrial Dance powerhouse of a tune. You can hear the Mark Reeder / Depeche Mode influence and for me is the pick of the bunch. The Danny Briottet and Rico Conning mix offers a clubbier vibe and the eight minute Hardway Brothers Dub takes off in another direction. The final Dispensary Remix offers more of a techno interpretation.

Martyn describes the music they are making as “dance music for people who are not allowed to dance together.” Whilst the future of clubbing and indeed the music industry is unclear, Walsh and Lyon state the post-covid music industry landscape suits them both – releasing music they love, curated from the heart.