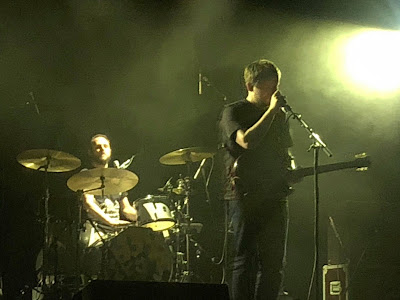 Live music. The buzz, the thud of the bass drum that mirrors your heartbeat, faster and faster as the energy in the room rises and the adrenaline starts to pump. It's a feeling that you don't get elsewhere, your aural senses triggering a reaction that enables to lose yourself in the creativity of others. Fuck, we've missed it for the past fifteen months. Ist Ist and Gravediggers Union provide us with a first trip down the road to what music lovers among us love the most.

We're not there yet of course. We're seated, we've got masks on (although the rules seem stricter than the guidelines for some reason, but we're here, that's all that matters) and we're spaced out. But my pissed mate talks in my ear in the middle of a song, my photos that looked great on a phone screen look shit anywhere else, there's a trail of people to the toilets, someone holding a camera up to film in your line of sight and there's people in the room you can't stand but have a begrudging respect for the common musical taste you share. That was all part of the normal, where we were at home before the world went all weird and crazy and we set exclusion zones around ourselves. It's there, tonight is a start, a very big step, an hour on, sat at home, the rush of excitement is still flowing through the veins.

The moment doesn't mask the fact that Ist Ist are developing into the most important band in Manchester right now. In a city where the outsiders are welcome, where we say we do things differently yet many follow the crowd, they stand out for their own uncompromising approach to their art, the unswerving belief in what they do. When you hear their second album, due for release later this year and from which they preview five songs, the momentum will become unstoppable in the way it did for many of the city's favourite sons and daughters, the ones that have lasted, endured and are more loved today than ever, and who had to fight for recognition from those that now fawn at their feet.

They've taken lockdown to not just write a second album, but to refine and augment their debut Architecture, released into the wild just over a year ago and hitting the top ten of all the physical album charts that matter by word of mouth and without touching a record store shelf. The songs have grown to fit this cavernous hall, that once might have been a flight of fancy to consider them filling, but which now you might fancy a wager on.

The likes of You're Mine, Black, Discipline, Silence, I'm Not Here and Night's Arm drive from the core outwards, like an unstoppable tsunami, powered by Joel's drums, knitted together by Andy's basslines, that flick the V sign at those old comparisons as they play their own game and the delicate detail that Mat's keys and synths layer over the top. Dead centre sits Adam's baritone that feels richer and more evocative with the passing of time; one minute lost in despair, the next letting go and expelling demons. 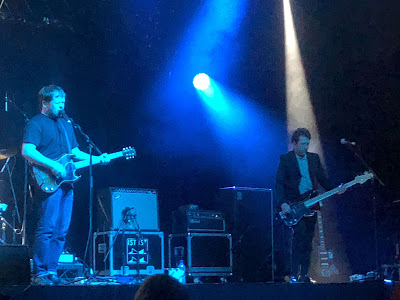 They have moments of contemplation too. Emily does it with a brooding menace that threatens to rip your head off, a reminder of how brilliant Ist Ist were back in the hazy beginnings of 2015, yet at the same time just how far they've come in that time. Son Is The Father is intensely personal, wracked with agony at loss coupled with the fear of the future as one generation departs and another arrives. Their mastery and control is exemplified though across early single Preacher's Warning, Architecture's opener Wolves, Under Your Skin, New Love Song (a reinvention of one of their finest two minute early punk tracks) and Listening Through The Walls, a new song that opens up the encore.

It's three new songs though - Extreme Greed, Fat Cats Drown In Milk and It Stops Where It Starts - that point at the heights Ist Ist are soaring towards with their forthcoming second album. You sense the audience being lifted by the snowballing momentum of the songs, the way in which they build and build to the choruses that threaten to remove any obstacle in their path.

They finish with Architecture's closer Slowly We Escape that over six minutes pulls together all these strands into one song. It's too much for a dozen or so people who leave their seats and head to the front for the final couple of minutes' instrumental blow-out, dancing socially-distanced, lost in the music. For some of us, opening pubs and restaurants isn't the end of lockdown, we need this as our oxygen and Ist Ist as one of our soundtracks. But for the first time in over a year, it feels like we can breathe again.

Ist Ist played Wolves, Extreme Greed, Silence, Discipline, Son Is The Father, Night's Arm, New Love Song, Fat Cats Drown In Milk, Middle Distance, Emily, Preacher's Warning, I'm Not Here, Under Your Skin, Black, Listening Through The Walls, It Stops Where It Starts, You're Mine and Slowly We Escape.

The evening is opened up by Gravediggers Union, who are the perfect foil for Ist Ist, unsurprising given that half of them is Michael Whalley, producer of pretty much all the headliners' recorded work, on live drums and guitar whilst Nik Brierley's vocals sound crisper as they echo round the room with a sense of foreboding and impending doom. Standout tracks are the opener The Day Before You Die from their EP of the same name and their own unique take on the Daniel Johnston classic True Love Will Find You In The End, which both retains the magic of the original but which has their own stamp all over it.

Their album Architecture, which reached number three in the independent album charts, number four in the vinyl charts and five in the physical album charts back in May, is available to order from their store on vinyl as well as CD, cassette and download. Our review of the album can be found here.