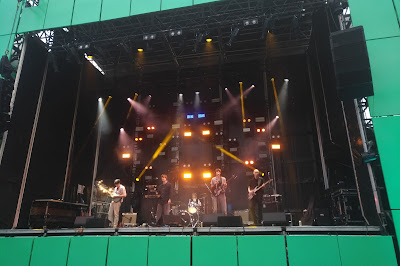 One of the highlights of the Manchester International Festival for us is the free series of live performances that take place across the city. Moved across from the Town Hall due to the ongoing works there, Cathedral Square is home to this year's hub and on a wet Monday night, Dave Haslam has curated two of the North West's most talked-about young bands in The Lounge Society and Blanketman.

The Lounge Society have had a pretty impressive first couple of years with them having cult indie label Speedy Wunderground's only repressed seven-inch single with their debut single Generation Game and recently their EP Silk For The Starving.

Hailing from The Calder Valley, a hotbed of talent based around their second homes Todmorden's Golden Lion and Hebden Bridge's Trades Club, the four-piece's approach is a direct and energetic, songs starting off with a blast on the accelerator pedal and then powering themselves through to the end, sometimes stopping abruptly a couple of minutes in or, like the aforementioned Generation Game and its questioning "what would the US do?", taking us on a longer journey. 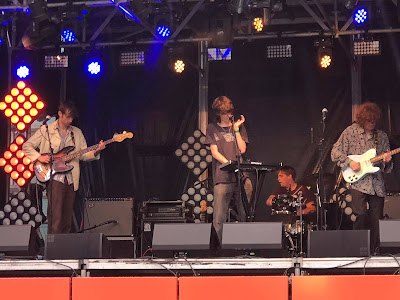 Over forty minutes they very much demonstrate that there's much to come. The spiky energy of the likes of Television from the EP, driven by Herbie and Hani's guitars and the anger and resentment in Cameron's voice, is channeled positively through a set of mostly unreleased tracks that show them balancing effortlessly between dark dingy rooms and bright dancefloors like many of their contemporaries. A rainy public square on a Monday night with the audience nursing a football hangover probably isn't the ideal place to witness them, but they very much demonstrate that the hype surrounding them is warranted.

We spin round to the second bigger stage at the other side of the square for Blanketman's first performance since March last year, immaculately timed to coincide with Adam's first day out of isolation. They've kept busy though, releasing their debut EP National Trust earlier this year, and the seven-track EP is heavily featured in tonight's set.

Live, their sound is a heavier mix of their punk-rooted songs drenched with melody, given lift and air by their clever use of backing vocals in all the right places to supplement or counter Adam's lead vocals and driven along by Ellie's relentless drumming that doesn't just demand your attention, it insists on it. There's plenty of good humour too, Adam's new guitar cable is so long it could probably reach the other stage and causes him no end of issues between songs to the amusement of his band mates.

Adding to the EP, which is played in full, with last year's single Taking You With Me and a couple of new tracks, they've got a very impressive set of songs with which to go out with across the country next month. They've got that magical combination of a sound that feels familiar, but which also sounds distinctive from the plethora of bands trying to elicit a similar response from the crowd. As the rain starts to come down as they finish with Harold from the EP, they've either delighted their faithful that have come out and braved the weather or won over the curious.

The National Trust EP is out now, but is released on vinyl this Friday and is available from Piccadilly Records.

Email ThisBlogThis!Share to TwitterShare to FacebookShare to Pinterest
Labels: Blanketman, The Lounge Society