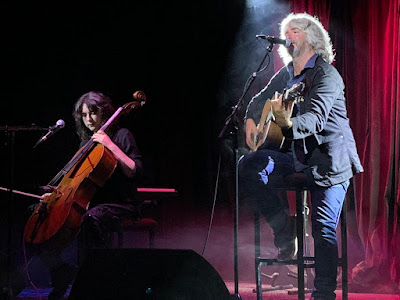 John Bramwell concluded his Hebden Bridge Trades Club residency with the third sold-out night of the run of socially-distanced shows accompanied and supported by Harriet Bradshaw on cello. He delighted a rapt audience with a set of I Am Kloot classics stripped down and reinvented as well as tracks from his forthcoming Full Harmonic Band record The Light Fantastic.

HJM (Harriet) Bradshaw has been touring with John on and off for a number of years now, but this run of shows in 2021 is the first time she's accompanied John on her own rather than with the Fidler brothers and Alan Lowles from the Full Harmonic Convergence also in tow. John's introduction, which explains how much of an inspiration she has been to him as he writes new songs and sees them through when he hits a block in the writing process because he wants to hear what she will add to them, is a pretty impressive recommendation from someone in their fifth decade of writing songs. 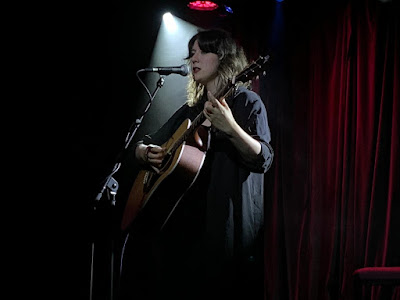 Her solo career is in its infancy with just her debut single Mermaids And Pondskaters, which opens her set, out in the world although an album has been written and is in the works. Switching between guitar and keyboard she reveals her own songs to be meticulously constructed almost poetic tales centred around the uncertainties of human emotions. The note to self of Yourself And Nobody Else is a reminder to put yourself first and not seek to impress others at your own cost whilst Stone Cold takes her back to her North Yorkshire home and time spent down by the river contemplating. Your sees her set a Silvia Plath piece to music whilst What That Makes Me very much has a feel of a book about a long-held unrequited love set to words. Whilst later it's her cello playing that threatens to steal the show, here it is her voice, rich and detailed that holds an appreciative Trades Club audience enthralled, adding light, shade and depth to the words.

John's set starts with a series of I Am Kloot favourites performed solo. He's on good form, despite admitting that three days in Hebden Bridge has left him a little tired. The magical thing about a Bramwell show, as someone tells him later, is that you never quite know what to expect - even if he repeats jokes he gets complaints about if he doesn't tell them and these songs are etched into the brains of many of the audience. You do get the magic of these songs, which seem even more potent and absolutely life-affirming stripped-down played to a room hooked on every note and every word, but they're delivered with spontaneous subtle twists and turns that has people coming back time after time.

There's plenty of new material, which starts with the last of his solo numbers When The Lights Went Out. Written after the unreleased The Light Fantastic album was recorded, it's made such an impression on John that he's going to go back in with the band to record it. He takes playful aim at his doubters who think at 56 he's lost the knack of songwriting. What the run of four songs, Sky Full Of Thunder And Lightning and The Light Fantastic's title track both unreleased and the recently revealed I Am The Sky and Time's Arrow, demonstrate is that is patently not the case. Whilst he tells us that the songs do have a country edge to them, they feel natural and have clearly recreated his creative fires, partnering up with talented musicians like Harriet who he's developed a symbiotic working relationship with. 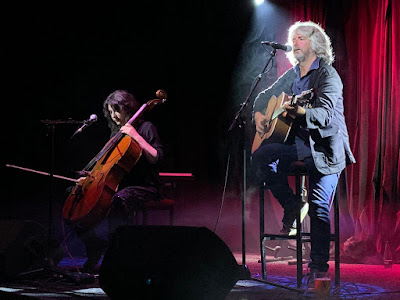 The Same Deep Water As Me is a prime example. Always one of Kloot's most evocative songs, the cello takes it to an even higher dimension, drenching it in a pathos that cuts through the warm air of the room like a knife through butter. Bullets, 86 TVs and Gods And Monsters are fueled by an edge that the recorded versions simply don't possess - the tension punctuated by sharp shards of cello which fire John's guitar playing. We're treated to an improvised new song too that comes out of guitar tuning with Harriet joining in - and it's made to look so simple.

The evening finishes with two old favourites - Northern Skies and Proof - with the audience invited to join in, a reminder of the healing power of music and what we've missed for the last eighteen months, like-minded people coming together with the leader of the group on stage, much more than a mere concert. There's laughter, moments of intimacy, interaction and confession through the course of the evening - memories of old songs that mark a point in time or an event and new songs that will no doubt make new memories in the future.

John played Bigger Wheels, Mouth On Me, No Fear Of Falling, From Your Favourite Sky, At The Sea, I Believe, I Still Do, When The Lights Went Out, The Same Deep Water As Me, Bullets, 86 TVs, To The Brink, Gods And Monsters, Improvised New Song, Sky Full Of Thunder And Lightning, The Light Fantastic, I Am The Sky, Time's Arrow, Northern Skies and Proof.