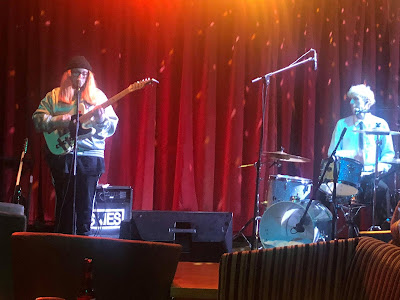 Whilst festivals are being cancelled around our ears, Manchester's After All Festival continued in a socially distanced format on Thursday night - a sold-out event at Manchester's Tribeca combining a range of different styles of music and urban poetry to an appreciative crowd that had been starved of live music for sixteen months.

After All Festival is the brainchild of Owen Meikle-Williams and has borne the brunt of cancellations galore as the pandemic moved into its second year. Unperturbed, this event was scaled down to a single venue and socially distanced format while maintaining a number of the planned artists on the bill for an enjoyable evening with a broad range of artists performing. 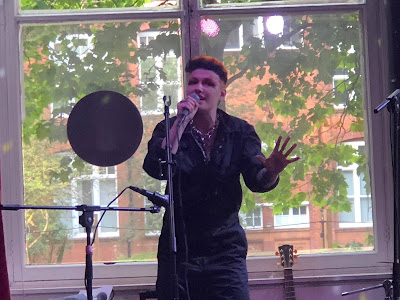 Opening the evening is Jay Page, who tells us that he's "not what you expected" using backing tracks instead of guitars. Despite the slightly surreal sight of the sun streaming through the windows behind him, Jay transports the growing crowd to the dancefloor with upbeat tracks like Pretty, Am I Here and Fuck You, delivering a high-energy set with vocals performed with a real sense of having lived every word of the songs until he picks up an acoustic guitar for a track called Patchwork Personality which showcases a very different type of song that talks about someone being made up of parts of others they'd met. Whilst not something we'd usually watch and enjoy, Jay's set was a great opening to the evening and got the audience's excitement up for what was to come. 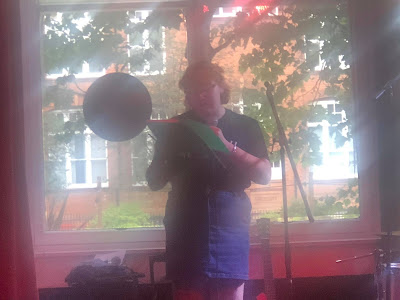 Billy Morrissey is the first of two poets and she's very much the junior of the two, which does come across a little in nervous delivery, but this is exactly the sort of place and with a supportive audience that she will find the confidence to overcome that.  Given that her stories are about falling in love, wanting what you can't have, the competitive nature of her peer group and the trials and tribulations of growing up, it does actually add to the sincerity of what she's talking about. With descriptive titles such as Fuel For A Burning Fire, Dandelion Kisses In A Burdock Field and Champagne Tastes Lemonade Money and a declared love of a certain singer (the clue is in the name), she gets a deserved warm reception for both sets. 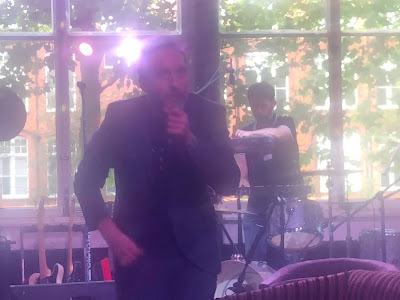 The Last Clouds' sonic soundscapes are the most ambitious of the evening, moving from almost not there to deafeningly loud in the blink of an eye without pausing for breath yet they are probably best suited to a small dark room than a bright Village bar where the complexities in the evocatively crafted keyboards and samples can be appreciated in full. They struggle as well with technical issues which don't help the flow and feel of their set. Front man Matthew tries to make up for this with a dramatic performance as he lives out the words of tracks like Josephine and with a partisan audience they get a strong response. 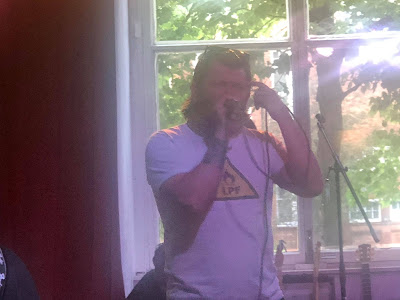 Leon The Pig Farmer, despite lockdown, has become a familiar and popular face and name on the Manchester scene, both as a gig-going punter and a street poet. Dealing with mental health issues and his own darkest experiences head on and taking aim at the gentrification and falseness of much of modern-day Manchester, some taken from his recent book Talking Myself Out Of Trouble, he's popular with a crowd that can relate to much of what he's talking about from their own experiences. Even when his wrath turns on to the inequalities within society it's done with the right mix of indignant anger and intelligent observation that's can so often be missing from this art form. 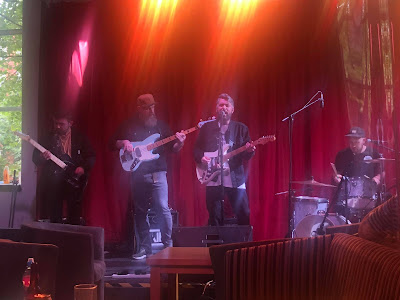 INEGO's set is chock full of songs that feel instantly familiar, like you're sure you've heard them somewhere before, but with enough of their own personalities in it to give it an individuality of their own. Their quality of their songwriting craft is their strength - tracks from last year's Departures album like I Need Your Love, Realise It's You and Can You Feel? build to uplifting choruses whilst being played with a rhythm, flow and tightness that hides the fact that they've had to recruit a last-minute stand-in bassist for the evening. Toby's vocals are strong, reassuring and transmit the emotion of the words he's singing in a way that the bands who the crowd have a shared love of like The Slow Readers Club have perfected and that's reflected in the response they get which gets louder as their set progresses. 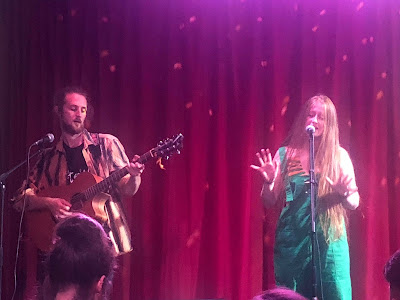 It wouldn't be an evening out these days without the big C word having its say. The Elephant Trees had been planning their first full band show for eighteen months until a few hours before doors when drummer Tom got the call to isolate. Unperturbed, and cheered on by their own fan club down in the front seats, Martha and Sam deliver a stripped-down set that wins over quite a few new admirers, instantly struck by her powerful voice and the way they transform their "dancey jams" including What Did You Do, that was picked up by Radio 1 last year, recent single Day 42, as well as their growing list of impressive singles as well as a new track Ones And Zeroes into a soundcase that showcases Martha's evocative vocals to the full. Their boundless enthusiasm, energy and clear love of what they're doing delights their own fans and wins them a whole load more. 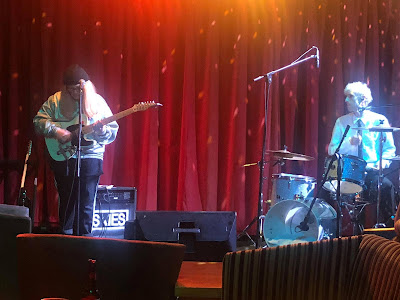 SKIES may have come all the way from Kent, but their Manchester gigs these days feel like hometown events such is the army of followers they've picked up on their travels and their daily live streams at the height of lockdown last year. They've been busy too in the last twelve months and the first half of their set is made up of new songs they've written in that downtime from playing live and we're some of the first to witness their new sound, which feels less electronic-based than their early singles but without discarding the magical formula that makes SKIES songs such undeniable earworms once you allow them to creep into your conscience. New single It's Not The End Of The World, with which they open, is a case in point, and they follow it with five songs - Give Up, Heroine, Sea Of Stars, Exist and Asteroid - that demonstrate a huge progression in their songwriting without losing their magic formula.
You'd forgive them for being a bit ring-rusty and the connection they make with their audience being diluted by the seating arrangements, but neither are the case - in fact the bond has grown stronger and the love and affection is clearly mutual.  The second half of the set feels like a mini greatest-hits - It's Alright, Afterwards, X, Born Yesterday, Green and Drone - with a whole list of favourites missing such is the strength of catalogue SKIES have been amassing under the radar. The love in the room is palpable by the time they finish the set, Alie standing on the monitor, Jericho standing up behind his kit, huge grins across their faces. We'd forgotten how much music can make you smile.
SKIES' official website can be found here and they are on Facebook and Twitter. The single can be purchased on their Bandcamp
They have the following dates scheduled - London Powerhaus (August 14), Northwich Salty Dog (21), Oxfordshire Front Row Festival (September 21) and Ramsgate Music Hall (October 30).
The Elephant Trees are on Facebook and Twitter.
INEGO are on Facebook and Twitter.
Leon The Pig Farmer is on Facebook.
The Last Clouds are on Facebook and Twitter.
Billy Morrissey is on Facebook and Twitter.
Jay Page is on Twitter.
________________________________
Follow Even The Stars on Twitter at @eventhestarsuk and like our Facebook page for all the latest updates
Posted by Even The Stars at 19:45