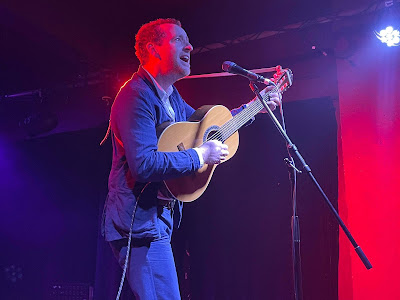 To many people the Night And Day Cafe is a second home. For Stephen Fretwell. For us at Even The Stars. It's fitting that this is the place for his Manchester album launch for his first album in fourteen years, the top 40 Busy Guy, and for our first restriction-free show for sixteen months. Performing a sizeable chunk of Busy Guy and a few old favourites to a dedicated crowd of Mancunians and those who'd travelled from further afield, for forty-five minutes we lost ourselves in music.

Whilst Stephen Fretwell hails originally from Scunthorpe, tonight has the feel of a real hometown show. As he tells us later on the Night And Day was the place he first felt anyone appreciate the songs he was writing over the road in his flat above the t-shirt emporium that used to sit above Matt And Phreds where he used to go and watch musicians ply their trade and learn from them.

Tonight is all about him though, alone up on the stage, the best way to listen to his twisted revelatory tales that take you deep into his world. With his album Busy Guy nestled inside the Top 40, there's an air of triumph in the air, of a returning hero after fourteen long years away.

There's moments where the crowd are pin drop silent, awestruck by the fact he's actually playing shows again, but more so by the magic in his words, in his guitar work that was often overlooked as it got lost in the band format that was demanded by the industry when his major label were trying to make him the next big thing in the singer-songwriter world. Fretwell is best appreciated, at his most affecting, when it's just him and his six-string, the focus on that world-weariness where his off-stage confidence is replaced by a vulnerability that the people in here can all relate to. 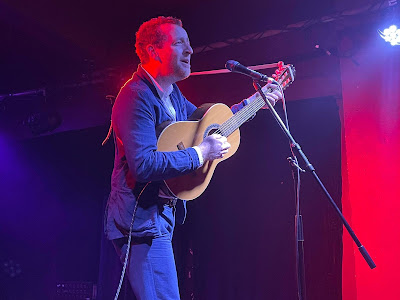 At others, the crowd almost drown him out. We can't work out whether San Francisco Blues was on the setlist or whether he took the crowd singing it at the end of Embankment as a sign to add in it to the set. But whichever, it felt like a beer-soaked moment of genuine connection and a release.

His self-deprecation comes to the fore at the end of Copper from Busy Guy when he describes himself as feeling like Jeremy Clarkson (a reference to his stripped-back hairstyle) giving a presentation about guitars. It's a modesty very much at odds with what has preceded it, a dark aching song that delves deep down into dark personal emotional abysses that you'd never associate with such a boorish oaf.

Green is stopped half way through - "too many words for me to learn" - and promised to be repeated at the end. No one expects him to and he doesn't. That's what you get from artists who live their songs rather than performers. Everyone understands, no one minds.

The main part of the disappointingly short set concludes with a mini greatest hits run of his three most popular tracks Emily, Run and New York which allow those who've listened silently to use their voices to join in. He improvises an ending to Run that namechecks 42nd Street, The Venue and 5th Avenue and "the pub behind Piccadilly that does The Smiths' nights", laughing at the end that he shouldn't forget The Star And Garter (particularly we think as The Courteeners nicked his Coney Island Blues track for their Smiths Disco homage). 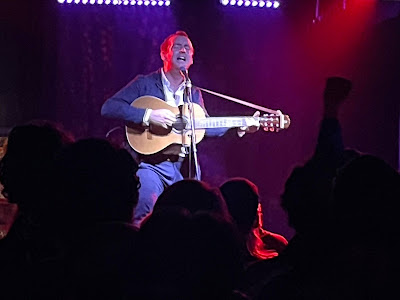 He's called back for an encore of Ground Beneath Your Feet before disappearing off into the night, leaving us to reflect on a magic that we never thought we'd witness again. Finding Fretwell had become a myth with all sorts of tales of what he was up to, an in-joke, a longing for more of Magpie and Man On The Roof. Now we have his finest piece of work to date with us, a record that feels like a picture of the real man, made the way he wanted it to be made rather than a man in a suit. Tonight felt like being reacquainted with a mate after years and it feeling like you'd been out the night before.

Our review for Louder Than War can be found here.