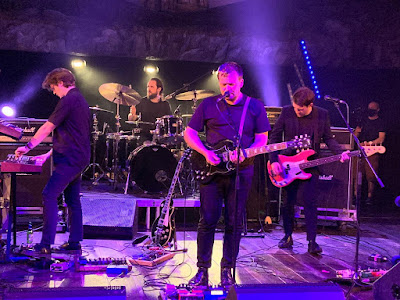 Right To Roam is a new two-day festival around a number of venues in Bolton town centre, part of an ambition plan of local music lovers and venues to inject some life into scene that gets dwarfed by the bright lights of Manchester down the road. We visited the main stage in the town's newly refurbished and impressive Octagon Theatre to catch Ist Ist, Gravediggers Union and locals Clouds And Errors.

Clouds And Errors opened up the stage and we'd been unable to find out anything about them in advance. The reason is that they're still at school and very much in the formative stages of the band, just going into the studio for their first recordings and without an internet presence for now. They put older bands to shame though; the five-piece are probably each talented enough in their own right to front a band. Jaws drop during the first song as Felix lets loose on a lead guitar solo that would have people fawning at were it one of their heroes. Mackenzie is already a confident front man despite his callow years, particularly without the guitar round his neck, whilst Millie's bass and backing vocals might not be as up-front in their sound, but they're equally as essential. The second guitarist Tashana has her moments where she takes control and Ife, on drums holds everything together and drives the songs along, dictating the pace. 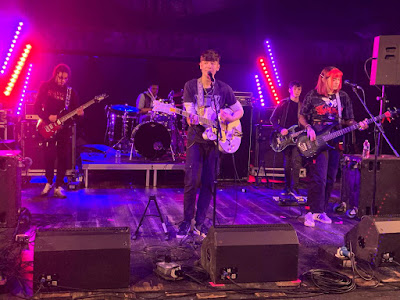 They're not just good, they've got a range of styles in their music that completely belies their age and their formative look as a band. One minute they're the goth / emo band we were expecting, the next soulful, then more traditional rock and roll - and each time they shift they pull it off with far more aplomb than a band whose sole existence is in one of those narrow categories. They announce a cover and we groan a little internally, before they make Blur's Song 2 their own. In the eight years since we moved back to Manchester we haven't seen a young band and been so blown away by them. They're still shrouded in mystery, for good reasons given their ages, but with performances like this it's going to be very hard to keep them secret for long.

It's a tough act for Gravediggers Union to follow, but they take it in their stride. The shape of the building (the clue's in the name) and the set from Hounds Of The Baskervilles draped on the wall behind them seems to suit their combination of sampled sounds, pre-records and live guitars, drums and keyboards. Ghost Dance is a compelling start and perfect introduction to those unfamiliar with them - haunting (if you pardon the appalling pun) and intense with Nick’s half-spoken half-sung vocals sitting dead centre of ambitious soundscapes that wouldn’t be of out of place framing dialogue-free black and white movies. 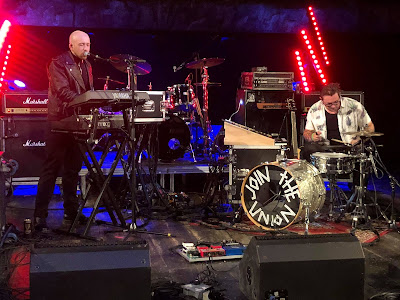 In The Rain is propelled along by tight drum patterns that head more into the post-punk elements of their work whilst Fire’s throbbing bass that reverberates menacingly around the room provides the undercarriage of a desperate story of a man facing his last moments before death by hanging and reflecting on the disposability of life. Their cover of Robert Johnston’s True Love Will Find You In The End is, as always, a highlight, perfectly capturing the balance between the couched optimism of the lyrics and the sense of foreboding that permeates the synths before they finish with Strange Love, from this year’s The Day Before The Day You Die EP.

Ist Ist seem to save their best performances for Bolton. Their last show as a three-piece in the UK was a ferocious pre-Christmas show a few years back at the Blind Tiger across town. With Matt on board now, adding keyboards or extra guitar, their sound now fills even cavernous rooms like this and then some. Older songs like Emily, Night's Arm and Son Is The Father have bulked out, beefed up and to be fair with their debut album Architecture out in the world and its follow-up ready for launch, the bar has been set phenomenally high, particularly when restricted to a forty-minute set.

Everything feels taken up a level now with Ist Ist. Adam's voice one minute threatens to tear your head off, his face wracked with the painful memories than drive many of these lyrics, sounding stronger than it's ever been. The songs themselves - Extreme Greed feels destined to break down some of the walls that age / reputation / style / whatever bollocks passes as an excuse have built to stop them in the past. Two other songs from the second album, It Stops Where It Starts and Fat Cats Drown In Milk, also demonstrate the progression that they've made in pretty much every aspect of their art in the past twelve months. 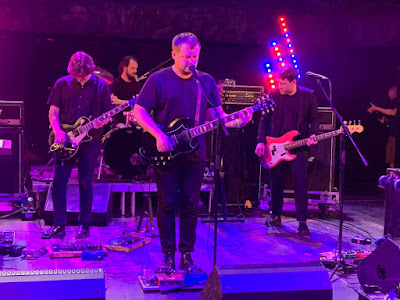 That doesn't mean Architecture has been disowned though - Discipline and, in particular, the set-closing Black demand to be played to a full room of swaying bodies rather than a seated masked audience. One look around and you see the connection they've made, the adrenaline they've set pumping round people's bodies. There's even a brand new song, Fools Paradise, debuted tonight that has Andy and Joel's vocals much more to the fore that suggests they're still developing and moving their sound on whilst retaining the core elements that has seen them capture an ever-increasing audience. Soon, you-know-what permitting, the momentum might just become unstoppable.

Their debut album Architecture is available to order from their store on vinyl as well as CD, cassette and download. Our review of the album can be found here.

Clouds And Errors don't have any social media or internet presence just now.