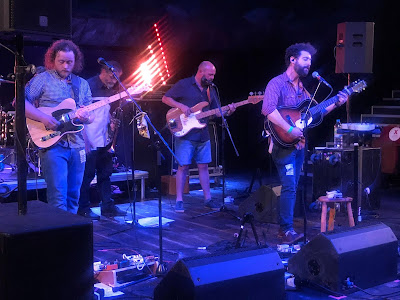 Day two of Bolton's new Right To Roam festival saw an outdoor stage in the town centre as well as at the Octagon, Alma and Vaults. We caught the last two local bands outside - Pageant Mum and Clouds And Errors - before heading to the Octagon for local boy James Holt and Granfalloon revealing tracks from his forthcoming Positive Songs album.

As part of the Right To Roam Festival, there was a stage on the patio next to Bolton's Market Place shopping centre where new local bands and artists were given the opportunity to play as part of the festival's commitment to support young local talent that might not otherwise get wider exposure. This is linked in to the Rockit Bolton project, a charity set up to provide local kids the opportunity to learn and play music and to find like-minded people to form bands with supported by mentorship programs.

The reason we'd arrived early was catch Clouds And Errors headline this stage after being blown away by their opening set at the Octagon the night before - and they confirmed our initial impression that they are the most exciting new band we've seen for a long time. Five accomplished musicians despite still being in their early teens who stand out in their own ways, but who come together to create a sound that would put established bands to shame. 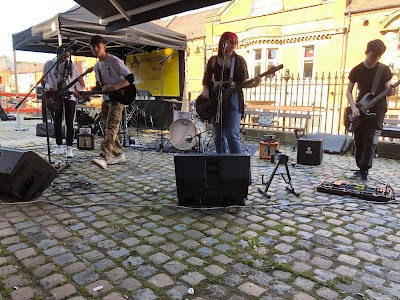 The guitar-driven Somewhere To Run To and If There's Anything, the latter declaring "I'm tired of all these techno tunes" before Felix takes the song away with a solo that sees jaws drop around the seating area, display a real sense of how to write and deliver songs with instant hooks and personalities of their own.  What's even more incredible is that we find out he's only just turned thirteen, yet plays the guitar in a way seasoned professionals would admire enviously.

The stripped down Missed Feelings that sees Mackenzie and Millie's vocals combining on a five-minute plus track with a perfect mastery of pacing and emotion - that we're in the outside area of a shopping centre and absolutely everyone shuts up and listens is testament to just how good they are.

Their cover of Blur's Song 2, which they seem initially unsure about playing, is a thing of beauty, Mackenzie channeling the snotty arrogance that Albarn used to possess, Millie's "woo hoos" capturing the playfulness of the song and Felix and Tashana completely nailing the guitars. The combination of Mackenzie and Millie's vocals, which provides such an interesting contrast, comes to the fore on See You, See Me, driven along by Ife's drums which could be easily overlooked but which are just as critical to the sound as he demonstrates on Know You Well Yet and the new song encore that's demanded by the audience.

Often we've watched a band and left excited, raving about them, and being disappointed by the reality the next time we see them (in the past we could blame alcohol for this). Clouds And Errors were actually better than we remembered. Things change with young bands for all sorts of reasons, but it wouldn't be a surprise to us to see them on some very big stages in a few years time. 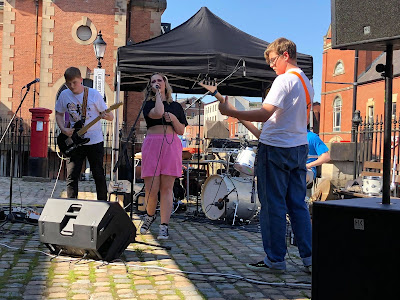 Prior to them appearing we'd caught a short four-track set by another young Bolton band called Pageant Mum who delivered an energetic punky set of originals and a cover of Rage Against The Machine's Bulls On Parade. Lead singer Izzzy has a solo project as a singer-songwriter and appeared at the festival the previous night, but here she seems totally in her element, an impressively powerful voice backed by a band that provides the riff-heavy backing on Sleep and the highlight of their set, final track, Better Than You with impressive venom.

James Holt opens up the main stage of the festival in the Octagon accompanied by Molly Becker on violin and backing vocals. As personable as ever, chatting freely about the songs before and after, he charms the audience with a set of beautifully crafted songs that are steeped in the finest traditions of the singer-songwriting genre yet with distinctive variety to each of them that stops them from ever feeling repetitive. Songs like Alone Again, Mystery Girl and Pendulum have a narrative to them whilst he coopts an audience member who shouts out into the storyline for Come Out To Play, a thoughtful wistful recollection of a parent keen to ensure their own kids don't waste their childhood. 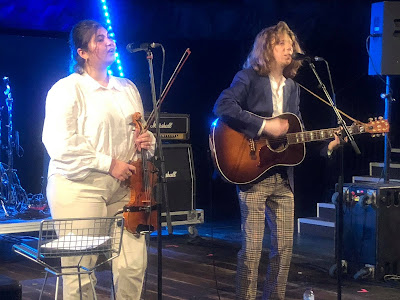 Stripped down to just acoustic guitar and violin, the songs are laid bare, allowing James' rich expressive vocal to come to the fore as he weaves his way through these stories. Molly's violin adds so much depth and shade to them as well without overpowering whilst her backing vocals give the songs lift in just the right places.

Little Green Light, based on The Great Gadsby, has a wonderful flow to it, James' knack of crafting detailed sounds from a simple acoustic guitar coming very much to the fore. Finishing on Whatever Happened To John, dedicated to our mutual friend John Hall, he demonstrates again his ability to go far past simple acoustic guitar structures to create something more complex yet no less accessible or memorable whilst couching them in songs that both possess a warm immediate familiarity with his unique personality stamp across them.

Next up is Granfalloon and the newest incarnation of the moving band of musicians that make up Richard Lomax's collective. Reunited over lockdown, some after eight years of not playing together, the five-piece Granfalloon have a very instinctive style of playing together as they demonstrate in a seven-song set taken exclusively from their forthcoming album Positive Songs.

As that title would suggest, the songs seek to take the positives out of the last eighteen months. My Tribe opening the set feels like a soundtrack to us all rediscovering the friends we'd missed recently. The style of the songs mirror the message of the song. Who You Are, their recent single, opening with warm vocal harmonies and brass, talks of learning to love yourself a little more with the passing of time, hopefully something people can relate to after so much time spent on their own reflecting. LUV Song starts with the repetition of the word LOVE by the five of them, which Richard explains pays tribute to many of his favourite songs that follow that style. It has a wonderful flow to it that makes it feel familiar and welcoming even on first listen. 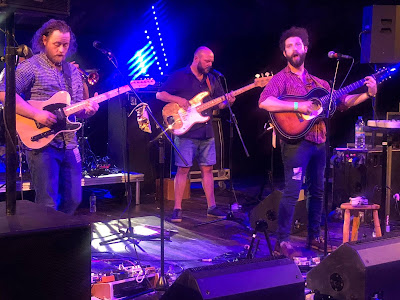 See You Soon talks of the excitement of playing live shows, something that they very clearly exude here, like old friends doing what they love best. The more melodic Working On Your Own reflects on the old life where Richard would sleep while others were working before going out to do his job sound-engineering, the song stopping dead at "Saturday night is the loneliest night of the week" before declaring "shiftworkers of the world unite." The album's closing track Better Than Today continues the theme of extracting positives from the negatives with a wonderful guitar line then solo running through it.

They finish with Pigeon, a song that they throw the proverbial kitchen sink at yet everything lands perfectly in place despite Richard's admission that they don't know how to end it. The audience instinctively join in clapping such is the uplifting feel of the song - and for forty minutes Positive Songs have lived up to their billing.

Clouds And Errors and Pageant Mum don't have any social media or internet presence just now.