Jake Hardman - Describe Yourself In 50 Words 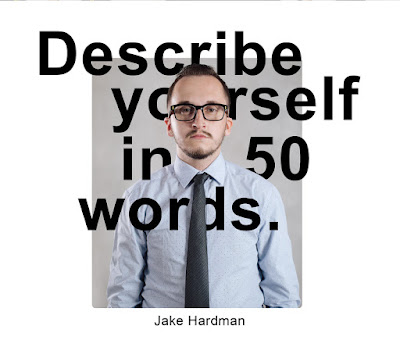 Manchester-based musician and songwriter Jake Hardman's debut album is the joyous sound of an open-minded individual who appears to have absorbed the very best of British music from the last forty years and channelled it all into thirteen excellent predominantly upbeat compositions that radiate freshness, talent, intelligence and humour. Andy Sweeney was suitably impressed by Jake's debut - read on to discover why.

Listening to this immensely enjoyable record from start to finish is like an aural lightning tour of some of the finest songwriters to have graced the British Isles, such as Squeeze's Glenn Tilbrook and Chris Difford and, most notably, The Divine Comedy's Neil Hannon, all of them very familiar with Hardman's storytelling, self-deprecation and tongue-in-cheek turn of verse. There also seems to be plenty of eighties electronic influence here, with some of Hardman's more synth-pop tracks giving a nod to artists such as Pet Shop Boys, Soft Cell, and Human League. The arrangements are ambitious, fun and are comfortable drawing from pretty much any genre of music; simply put, this is intelligent pop music with a dramatic flourish that doesn't seem to give a damn about coolness, instead concentrating on the lost art of writing relatable lyrics, a bloody good melody and, of course, remembering to include plenty of catchy choruses.

I first became aware of Jake's work when he popped up on a Divine Comedy Facebook group doing a bit of shameless self-promotion (and why not?), plugging his latest single, Soldiers And Cowards, which he described as very Divine Comedy influenced.

Indeed it was, and I'm sure Mr. Hannon himself would have been proud of the superb instrumental arrangement on this undeniably foot-tapping brass-infused song. It was enough to draw me in and leave me wanting to hear more, but I quite honestly wasn't expecting an album of such quality, flair and aplomb.

It's not often I play a new album three times in a row for the sheer pleasure of it, but Describe Yourself In 50 Words has well and truly hooked me. Highlights, for me, include the Hannonesque How The Other Half Live, The Deadly Pursuit Of Annie Benson, which sounds like Squeeze at their most exuberant, whereas I'm Yours And You Are Mine shares the same compositional values that made Ben Kweller's Sha Sha so irresistible. Conversely, The World Is Testing My Patience has the electro-pomp characteristics of the Mael brothers' art-pop outfit Sparks and Cone Of Shame is another sublime synth-fest that wouldn't have been out of place on Teleman's 2016's corker, Brilliant Sanity.

The final track on the album is the piano-driven Enough, a beautifully written and performed ballad reminiscent of Joe Jackson at his best, which brings the record to a close in a sublime manner. The fact that this album is so varied, so eclectic, whilst still retaining a strong overall character is one of its many strengths.

Is it perfect? Perhaps not. It's No Fun Dancing On Your Own, for example, has an excellent electric guitar lead in it, but the whole mix is rather messy with synths falling over each other in the mid range. However, the slightly sonically unpolished nature of some of the songs give the record the kind of charm that Mull Historical Society's debut radiated, rather than serving as any kind of distraction.

Realistically, you can sometimes tell that this album hasn't enjoyed the benefit of the largest budget, but what has been achieved in spades throughout is showcasing twenty-one year old Hardman's impressive, rich songwriting talent and his exceptional ear for a hook.

Describe Yourself In 50 Words is full of earworms, but also has the richness of composition that will draw you in again and again, with lines you may have missed the first couple of times popping up to draw a wry smile. The very fact that there has been a physical CD release is indicative of Jake's self-belief and, in these lean days of newer artists sticking with digital only releases, that is very much to be admired, as, indeed, is this accomplished debut. I can't help feeling, however, that the best has yet to come.

The album is available via his Bandcamp.