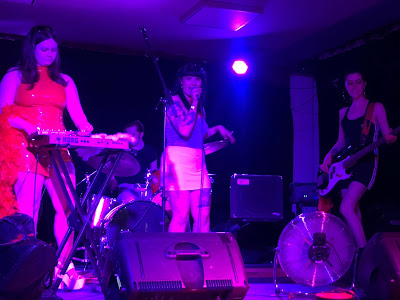 The Red Stains made their much-anticipated return to the live stage with their first show in eighteen months at a socially-distanced sold-out show at Aatma on Thursday night supported by Sick Ducks. As unpredictable as ever, they demonstrated that absence had definitely made the audience's hearts grow fonder.

Sick Ducks introduce themselves as "probably going to ruin all your evenings" and opening track Coasting by boasting that it nearly has a thousand plays on Spotify. They're clearly not the sort of band to shout about themselves - later on they tell us we're only here for The Red Stains - in the way many with way less skill and far less songs do. There's references to only having played to two people previously and you sense their real love is the simple pleasure of the three of them getting together in a room and seeing where their music takes them. 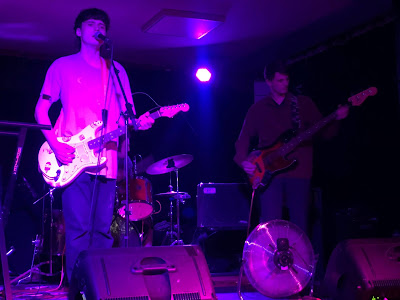 Their songs are very much rooted in a love of music and classic song structures yet there's plenty of variety in their set - one minute Louis, Cristy and Callum losing themselves and us in an aural onslaught channeling the likes of Dinosaur Jr and early Lemonheads, the next taking us on a sprawling melodic ride on possible future single maybe called I Don't Want To Go and on a new song called Good Boys Eat Their Greens. They save the best - What's Up With My Mate - a thrilling headrush of a song for last. If the crowd weren't here to see them, they've certainly won the room over by the end of their set.

"We're back" declares Natalie, chief Red Stain, as they set up before launching into a line of Abba's Knowing Me Knowing You that the crowd yell back Partridge-style "Aha" at the end of. Ella turns on her Korg and it lets out a piercing shriek. You'd be forgiven at this point for thinking The Red Stains don't know what the hell they're doing. Not taking them seriously will be a mistake many will make, because in their own sweet and sour way they're deadly serious and mean business.

At times it feels like they're playing four different songs, early tracks like Trolley Dashers, Mother's Ruin and Pacer Train in particular are powered by their own disorganised propulsive energy. They shouldn't work, as Natalie screams over the top of a toxic(ating) mix of bleeps, sharp-edged bass and feral drums - one minute smiling sweetly like butter wouldn't melt, the next spitting anger that makes you glad there's social distancing going on in the room. 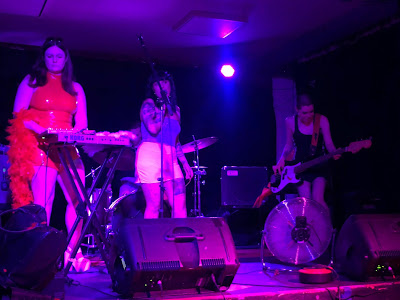 Chaos works in small intimate rooms like this, often it doesn't translate to bigger stages, but what The Red Stains demonstrate tonight is that they're managing to channel that wild energy into something that doesn't lose potency. Mannequin spews vitriol and a vicious warning to those who might reduce them to an object, Jump The Met has become a fare-dodgers' anthem and Freezer Jesus feels like Common People for those who shop in Iceland.

The two newest songs in the set - TV Static and Smile - show the progression though; songs with more structure to them yet without losing the uniqueness that has made them a breath of fresh air to blow away the stale air of indie boyband that seems to be everywhere these days. Sterling's bass and Ben's drums provide the solid spine for Natalie and Ella to drape their words and sounds around - and yet the unpredictability remains dead centre at the core of what they're about.

They leave us with a couple of covers - Madonna's Material Girl is given a workover from perfect pop to rough diamond and The Fall's Totally Wired is one part shambolic one part absolutely brilliant, channeling its creators and its replicants in equal measure. The (socially distanced) full room rise to salute them as it comes crashing to a halt. The Red Stains are imperfectly perfect, seemingly perpetually on the cusp of implosion, acting like they don't give a fuck and lulling you into a false sense of security before delivering a knockout punch. One way or another, they're going to blow up, which direction is anyone's guess.