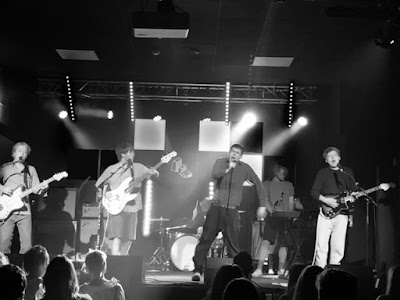 Thank you Shame! Tonight we were made to feel alive again. Bringing a mate to his first gig in fifteen months was always going to be emotional but tonight’s show by the raucous outfit Shame at the wonderful, and brand new, three hundred and fifty capacity space Future Yard in Birkenhead confirmed what we already knew - music is good for the soul and live music even more so.

Concerns that sitting two to a table in designated seats, with no standing allowed and social distancing to be adhered to at all times, did not dampen the spirits of band and fans alike as Shame delivered a blistering fourteen song set comprising primarily of their forward thinking experimental second album Drunk Tank Pink as well as some classics from their masterful and critically acclaimed debut Songs of Praise.

There’s no let up from the start as the band pile in with five songs from their latest album. Livewire frontman Charlie Steen is excitable from the off despite this being the second show of the day due to popular demand.

Great Dog and Born in Luton are the perfect openers to the set. In typical Shame style they’re not easing in fans, some of whom are experiencing their first live performance in over fifteen months. Instead they grab the bull by the horns, not holding back, and by the time we reach Alphabet with Steen and his compatriots asking us “Are you ready to feel good?” it’s obvious the gig-starved audience are ready to let their hair down and embrace this rollercoaster ride. 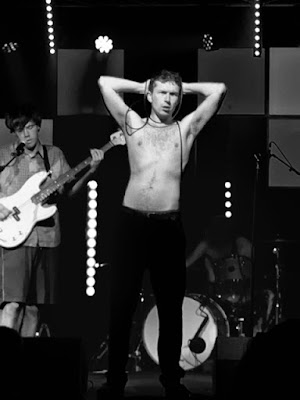 The twitchy and angular March Day and 6/1 provide a double sonic assault on the senses. Songs about claustrophobia and detachment played to a congregation who have felt nothing but this for so long.

From the “In my room, in my womb, is the only place I find peace” proclamation of Steen on March Day to the “I represent everything that I hate” on 6/1 it’s easy to recognise where he comes from although this band aren’t just all about intensity and seriousness. There’s fun and frolics too as the band, clearly enjoying themselves, laugh and joke on stage letting themselves go with their new found freedom back in the limelight doing what they love and doing it brilliantly. This radiates through to the crowd who are all smiles and increasingly enthusiastic and responsive to each number performed.

The ever exuberant bassist Josh Finerty runs a marathon onstage while bouncing off the walls and everything else in sight including the drum kit. His rapport with the ice cool guitarist Sean Coyle-Smith goes a long way in showing their tightness as a band yet it’s fellow guitarist Eddie Green, seamlessly powering his way through the songs with what appears consummate ease, that catches the eye and the ears. Long time friend Makeness (aka Kyle Molleson) plays his part adding new dynamism to the band. The multi-talented songwriter and producer is an influential figure in many ways and we’re also told the photograph on the reverse of Drunk Tank Pink is the view from Kyle’s Dad’s (“Acid Dad”) house. A six-piece Shame showing adventure and gusto aplenty. 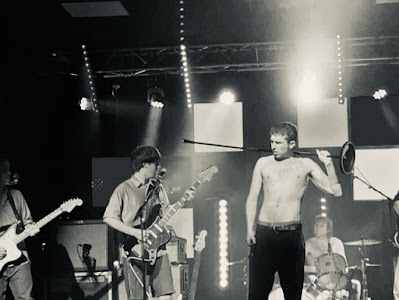 Nigel Hitter is sandwiched between debut album favourites Concrete and Tasteless and it’s the former and latter that get the sparks flying making us forget we are all actually sat down at a gig.

Steen bawls out “I hope that you’re hearing me” on Concrete yet it’s visually he stands out. A mix of Iggy and Lydon it’s impossible to take your eyes off him. If he’s not beating his chest, rubbing his hands together gleefully, giving you the mad stare or holding the mic stand aloft then he’s prowling the stage area while still managing to fix his eyes on every member of the audience. It’s unnerving and unsettling but also reassuring at the same time.

It feels like the roof is going to come off on Tasteless. Charlie Forbes, relentless throughout the whole set, pummels the drums as a hoarse Steen delivers a low punch exclaiming “I like you better when you’re not around” before there’s a seamless transition into new crowd favourite Water in the Well complete with Coyle-Smith’s on point riff. Steen, forever the showman, enticing everyone into his world with his onstage vitality.

Debut album opener Dust on Trial and penultimate second album song Harsh Degrees remind us that Shame are progressive, forward thinking and not afraid to take chances. Dust on Trial has youthful exuberance about it in abundance whilst the zest of Harsh Degrees with its shouty post-punk vibe culminates in a cacophony of noise.

Steen champions small independent venues like tonight’s and also informs us it’s been great for the band to play so many shows in a plethora of new towns to them assuring us that they can’t wait to be back again only next time with plenty of crowd surfing to compensate for his “shit banter”. His words, not ours, although the crowd would disagree with him as they hang off every word he says.

Saving the best for last, we’re sober but punch drunk from their sonic assault, Shame serve up a trio of tunes that may rank as their best when performed as such live.

Snow Day has an edge to it. It’s fraught and it’s frenetic with an infectious groove. A bellowing Steen channelling all his energy into the song, shouting from the rooftops before mid song reverting to spoken word as the band engulf him, surrounding him, protecting him, before opening up and letting him release that pent up frustration against a backdrop of harmonies. 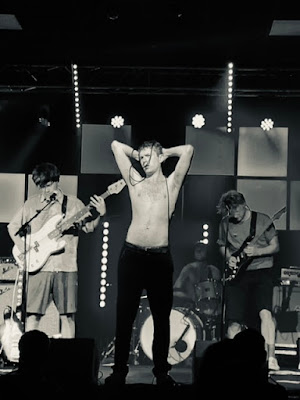 The biggest roar of the night comes when the opening chords of One Rizla kick in. With over six and a half million hits on Spotify alone it’s hard not to see why the dazzling hook that accompanies the song is lauded so much. It’s enchanting and alluring as Steen himself. He throws his mic from hand to hand telling us “my voice ain’t the best you’ve heard and you can choose to hate my words, but do I give a fuck”. It’s anthemic, it’s euphoric and for some it’s too much to hold back any longer. People rise to their feet in celebration and we’re all simply lost in the music and simply forgetting we should all be sitting down. The power of music at its very best.

Station Wagon is a perfect set closer. Everyone’s been on board for the duration and now we’re on the final part of the journey and it epitomises the whole set structure tonight. A slow burning build up, increasing in tempo before a period of calm and then an explosive dissonant climax leaving everyone in attendance signing out on a positive high. It’s a clever song illustrating the close bond between band. All members offering their own musical input and creativity and blending it into one seismic noise.

Departing the stage Shame promise to return one day. You can sense they’ve missed this as much as we have. A standing ovation from a vociferous sell out crowd ensues. The hairs are up on the back of the neck, goosebumps follow and it almost feels like normality has returned. Everyone feels alive again. Thank you Shame!

Email ThisBlogThis!Share to TwitterShare to FacebookShare to Pinterest
Labels: Shame