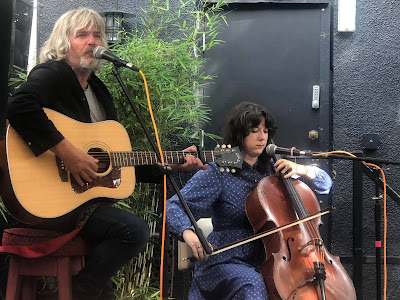 John Bramwell brought his socially-distanced tour to the familiar surroundings of the Rose And Monkey's beer garden on Sunday afternoon with a mix of old I Am Kloot favourites and tracks taken from his new Full Harmonic Convergence project. Accompanied by HJM (Harriet) Bradshaw on cello and supported by her own six-song set, John delighted an audience full of familiar faces.

Harriet has been playing with John on and off for many years now and started her own solo career earlier this year with her debut single Mermaids And Pondskaters. She moves between acoustic guitar and piano across her six song set which starts with the aforementioned single and which also features a song You're where she wrote music to a Sylvia Plath poem. Still a little nervous performing on her own, her calm unflustered demeanour that she displays when playing with John does desert her at times, particularly when she sings prat instead of sprat during You're and has to stop herself to correct. She's in the right place for this though as the crowd are both supportive and appreciative of both the quality of her songs and her vocal delivery, which many wouldn't have previously experienced even if long-term followers of John. 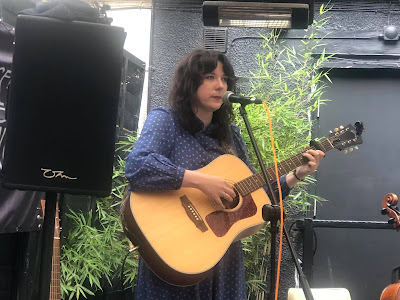 The songs tell stories and deal with human stories - Yourself And Nobody Else is clearly a letter to self encouraging and advising her to consider what's right for her first before trying to please others while it's less clear whether What That Makes Me is from her own perspective, but it tells the tale of someone hanging on to a love that has moved on a long time ago. She grows in confidence as the set progresses, buoyed by the warm response she gets. Her solo album, which she's recording with fellow Harmonic Convergence member Dave Fidler, promises to be an under-the-radar delight based on these six songs.

Having seen John dozens of times over the years, both as a solo artist, with I Am Kloot and with various combinations of his Full Harmonic Convergence, this is the first time we've seen him in a duo with Harriet who joins him on stage on cello for all but the first four songs of his second performance of the day.

You do know roughly, and that word's chosen deliberately, what you're going to get with a John Bramwell live show. There's a sense of chaos from the opening moments where he's deciding which guitar he's going to start off with, his joke about writing down a setlist and then putting it down and not being able to read it (which he says he gets complaints if he doesn't tell, and you suspect that might actually be the case), joking with members of the audience about interpretative dance and the bar staff as they respectfully as possible do their difficult job around the set and generally taking the mickey out of himself and anyone who's brave (or stupid) enough to raise their voice with off-the-cuff remarks alongside some old favourites.

The connection he makes with the audience though means he could be forgiven anything. Not that there is anything to be forgiven; quite the contrary with a set of some of the finest songwriting to ever come out of this city. Songs that are often simple in their structure, although as he points out after opener Bigger Wheels not always, but with lyrics that speak to those of us who've grown up (or not, given some of the conversation) in the same places and at the same time that inspired them. Drinking and disaster, a catchphrase that still follows him around, sit dead centre in many, but they delivered with an unerring ability to capture something relatable - whether it be going back two decades to the tracks from I Am Kloot's debut to Before The Lights Went Out, a song so new it was written too late for the Full Harmonic Convergence's forthcoming album. 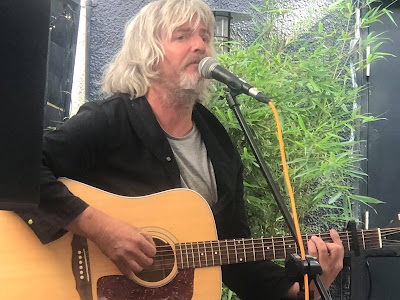 The songs feel invigorated by the combination of guitar and cello, Harriet's delivery more than compensating for the lack of other musicians and giving them a real dramatic edge that serves to heighten the tension and emotional turmoil of the lyrics. Despite the city moving around the garden, the crowd listen attentively and awe-struck, joining in on request on To The Brink. It's equally as evident on the new songs - I Am The Sky and Days Go By possess the same timeless traits as their elders and stand right up against them.

As is tradition, John finishes on crowd favourites Northern Skies and Proof and we all sing along in unison as if we'd written the words ourselves. We couldn't have written something so poetically beautiful of course, but then whilst we have John Harold Arnold Bramwell on our side we have someone to tell our side of the story for us.

John played Bigger Wheels, Mouth On Me, No Fear Of Falling, From Your Favourite Sky, The Same Deep Water As Me, 86 TVs, Bullets, Before The Lights Went Out, Days Go By, To The Brink, I Am The Sky, Time's Arrow, Northern Skies and Proof.