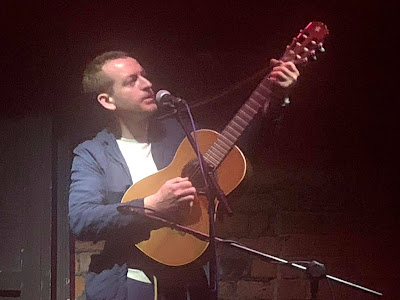 "Where's Fretwell?" has been a catchphrase in the corners of the internet that remembered the unique charms of the Manchester-via-Scunthorpe songwriter Stephen Fretwell from the middle of the 2000s when he released two much-loved but commercially-ignored albums Magpie and Man On The Roof. After twelve years in the wilderness, he's about to return with a new album Busy Guy - and we were fortunate enough to be in the twenty-five strong socially distanced crowd at Salford Eagle's Inn for just his second comeback show.

The intimate knocked-through terrace house feel of the Eagle Inn is the perfect place to welcome Fretwell back into our world. Twelve years absence may have aged us all, but he still has that slightly awkward stage presence that makes him so loved, punching the air at the end of songs, clumsily propositioning a member of the audience whilst reminiscing about living nearby on Salford Precinct and showing off some of his finest Dad-dancing hip moves. His self-deprecating charm makes him more loved rather than less.

The set is split into two sections, as much we suspect for us to get drinks half way through as Fretwell tells us he only found out just before, but it also gives us time to take our breath and reflect after a first half where he plays Do You Want To Come With, Run, Bad Bad Me, New York and Emily, all from his debut Magpie, and a reminder why we all fell in love with him back in 2004. You can hear a pin drop as the subtlety of the acoustic guitar and the richness, aged but no less potent, in his voice fill the room like he'd been away twelve weeks rather than twelve years. Our awe seems to unsettle him until he strikes up conversation with the audience, reassuring him that we're attentively listening whilst pinching ourselves that it's actually him up there in front of us.

There's new material in the first half too - Busy Guy's opening track The Gull And The Goshawk and "media focus track" The Long Water give a telling insight into the record - songs crafted for just an acoustic guitar and voice, the moments of silence between bars and lines heightening the tension and sending the hairs of the neck on to their ends. Later there seems to be a reluctance to play more from the album, but the sense in the audience was that we wanted to hear it all - we were hear as much for the man of now than the memories. In the end we get seven of the ten tracks from Busy Guy though. 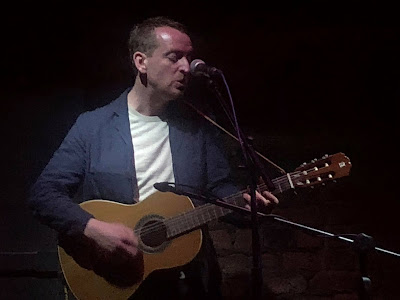 The second half of the set feels a lot less structured with requests being taken for Coney Island and Lost Without You. As Fretwell explains to us though, this is where he feels more comfortable rather than when he felt sometimes like performing was going through the motions. It's a very honest statement to make, probably one to make his manager who's upstairs wince, but it's not uncommon among his peer group whose approach to music is that it's a release and a means of expression rather than a career.
The new songs off Busy Guy very much feel like they follow that approach. There's nothing of the commercial immediacy of the likes of the Magpie singles, but that isn't the point of this return to music. As he tells us he's simply missed it and the time feels right now - he uses the phrase "terrifyingly beautiful" to describe the whole experience. Orange, Copper and Summer are unheard by most in the room and are played to absolute silence and reverence, achingly fragile and intense in structure and delivery and reflect that Busy Guy is a record to immerse yourself in.
It felt like a genuine privilege to be in the room to witness this set. Time and absence have made the older songs more important and given Fretwell legendary status, while the new material feels like a new start and a new chapter and hopefully they won't get lost in the short-sighted clamour for nostalgia for nostalgia's sake that follows around returning artists like a bad smell.

Stephen Fretwell played Do You Want To Come With, Rose, Run, Water Blue, The Gull And The Goshawk, Bad Bad Me Bad Bad You, The Long Water, New York, Emily, Oval, The Ground Beneath Your Feet, Orange, Funny Hat, Scar, Embankment, Coney Island, Lost Without You, Copper, Simple Twist Of Fate, My Old Friend The Blues and Summer.