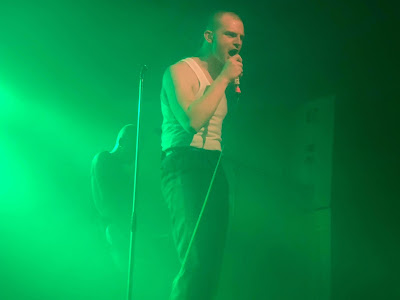 Birkenhead witnessed VLURE's first live show since last spring; a euphoric emotional return to the stage - a band emerging from the cocoon of lockdown and spreading their wings like the most beautiful of creatures.

It's our first visit to Birkenhead's Future Yard and we love the place. The Live Room is impressive; intimate but able to easily cope with the scale of a band like VLURE's sonic ambition with a crystal clear sound set up and a lighting rig that would set larger venues to shame. Add in the impossibly friendly staff, the free gig poster and the real sense of community, it shows what can be done from scratch. With a great line-up for the rest of the year, it's hoped that the Birkenhead and wider public give them the support they deserve. 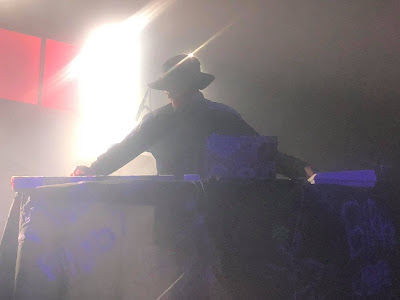 Local favourite Zee Davine, with Birko Uber Alles plastered over the drape that covers the table on which their kit sits, opens up the evening with a twenty minute set of a mix of live and sampled instrumentals that reaches out to every corner of the room. One minute throbbing beats that shake the floor, the next minimalist dropdowns before taking off again set to a background of flashing lights, it's a set that steers well clear of the repetitive monotony that this genre can often sink into. The uncertainty of where the music is going to take you next is one of the biggest thrills we've missed over the past twelve months and this set, finished off with them departing to a mangled version of Dexy's Come On Eileen reminded us of that.

As we wait for VLURE we hear screams from backstage as Hamish, front man of VLURE, psyches himself up for the moment they've been waiting for since they stepped off stage at Glasgow's QMU last February when they stepped in to support The Murder Capital at the last minute. By the end of the set he's about to burst into tears such is the pent-up emotion of finally being able to do what he loves most in front of an audience that understands them, that needs the magical release of music that makes your heart beat faster, your pulse run quicker and sates the desire for human connection on a basic level through words and sound where you can see exactly what this means to everyone.

Whilst lockdown has decimated the live music industry, watching VLURE gives us hope that some good will come from this unholy mess. The raw unpredictable nature of VLURE is still there; but from the chaos comes something more potent. They're likely to get lumped in with many of the post-punk names that roll off the tongue of people desperate to create a movement, but there's something more about this bunch. They create music you can dance to, not that we can just yet, Alex's keyboards and Carlo's drums creating a framework that opens up possibilities for a spectacular future. But in the here and now, VLURE have a set of nine songs (including a cover of Faithless' God Is A DJ that makes our earlier point for us) that's as impressive as any band we've ever heard at this stage of their development. They've taken the time out to cement their identity, work on these songs and build an overwhelming wave of energy to unleash on us. Hemmed in by the stage for now, you sense Hamish wants to be out among us, just as we want to be up there with him. VLURE connect in the way the very best music should. 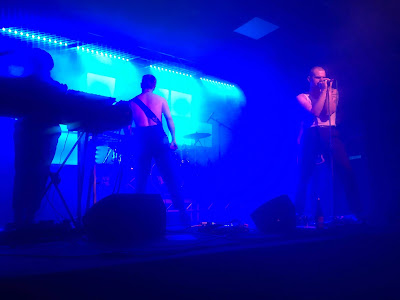 Those songs fly by in a blur of adrenaline; the call to arms of the opener Desire, the pause for half a breath of the glorious Forever, the questioning of what it's about ("where's the sense, what's the norm, what's life but a storm" ending in "fuck the norm") of The Storm, the uplifting living for these moments feel of the set-closer Euphoria 94, all creating a moment and a sense of connection of their own, living breathing examples of exactly what we, and they, have missed these long barren months.

There's beautiful moments of spontaneity - the Goldie brothers Conor and Niall sitting either side of Hamish who passes a drink to Niall, Hamish's mic lead falling out and him not noticing for a second lost in his world and a blown kiss of appreciation to Alex as he prowls the stage, resisting his primal urge to jump down and join us. The encore, demanded and unplanned, sees them repeat Desire as they have no more to give us, but with Hamish insisting we chant the song's one word chorus back at them as they do.

VLURE are something special; a diamond in the mine of bands, charting their own path and course with an intensity and passion that can never fail to arouse the most base human instincts and needs for connection through music. This feels like just the beginning, but even now the sense we leave with, exhilarated by what we've witnessed, is that the only thing that could stop them is themselves.