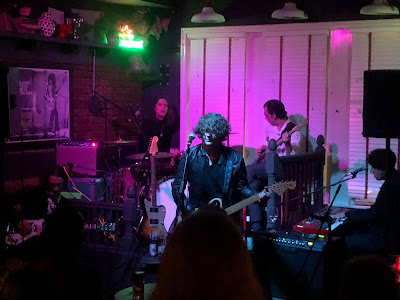 With their forthcoming July dates falling victim to the latest extension of UK restrictions that seem to apply to music and other arts venues and not a great deal else, The Blinders decided to sate their desire to play live with two last-minute intimate shows at their favourite local boozer The Rose And Monkey in Manchester's Northern Quarter. An hour-long set captured highlights of their two albums to date in the stripped down Lounge Lizard format, which they plan to give a formal release in a few weeks.

Rather than following the simple route of taking songs down to acoustic performances of tracks, a format that dates and ages fairly quickly for most bands, The Blinders decided to reinvent a dozen or so tracks for places more suited to socially distanced performances where they couldn't rely on the exceptional power of their traditional live shows. It allowed them to expand their horizons too - tonight The Blinders are a five-piece with a second guitarist, Eoghan from Cabbage, and a keyboard player supplementing and fleshing out the new takes on these songs they'd discovered by exploration and experimentation. Out of necessity came something quite beautiful and which is very evident that they're excited about showing to people - and which may well infuse the new material they're currently writing and recording.


The songs they play, and which they've recorded for release, are primarily the ones you'd expect with a couple of curveballs. Despite the persistent calls for it from the back of the room, there's no Brave New World. Yet like when Nirvana didn't bother with Smells Like Teen Spirit on their majestic MTV Unplugged album, it's not missed at all musically. What they do in its place is unravel songs and rebuild them with subtle layers replacing the adrenaline and anger - equally so on old favourites like ICB Blues and L'Etat C'Est Moi as well as on second album Fantasises Of A Stay At Home Psychopath's Something Wicked This Way Comes and Lunatic With A Loaded Gun. 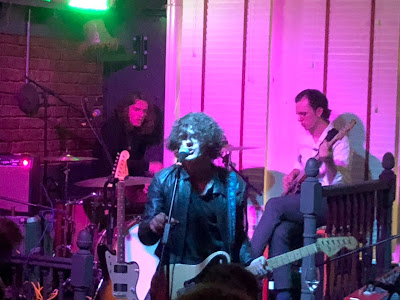 The show is informal and relaxed; the camaraderie between the five of them very much in evident, they look like they're enjoying it, freed from the pressure of putting on a show and letting their musical instincts lead the songs. Aided by sound that shames some of the bigger venues around town, the subtleties in Jonny's keyboards, opening No Man Comes and Circle Song in particular, and the detail in the guitar and bass are accentuated, while Tom channels his inner seventies rock icon without the aid of playing in character as he did with Jonny Dream during the Columbia era.
It's the Fantasies songs that benefit most from the reinvention - Black Glass, Mule Track and the aforementioned Circle Song feels like Russian Matryoshka dolls, revealing more as the songs progress; the complexities of the songwriting being laid more bare than their album versions and the limited live performances back when packed venues and heaving moshpits were a thing. They also take on Echo And The Bunnymen's Killing Moon, a iconic track in its own right, but one that they adapt to the circumstances and make their own.
The crowd's appreciative throughout, even if a few, astonishingly given how we've been starved of live music, like the sound of their own voices a little too much - and it's testament to the way venues like The Rose And Monkey have adapted to the constraints and threats to their existence that the set-up makes it feel like a comfortable and natural experience. Musically, it's further whet our appetite for the return of full capacity shows whilst hopefully helping to influence the band's future direction - and of course the release of their studio recording of this set in four weeks' time.

The Lounge Lizard Session album is released on July 23rd. Signed copies of the white vinyl version are available from Piccadilly Records.