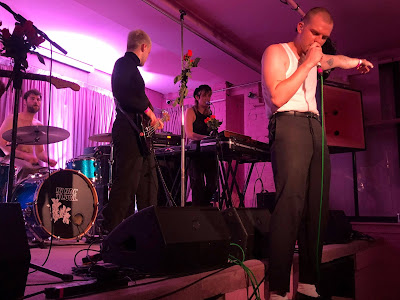 VLURE completed their short tour of England with another sold-out socially-distanced gig in the Pink Room of Yes in Manchester. Once again they delivered a set that blew away those who had an inkling of what to expect as well as those catching them for the first time. Support came from an intense performance by Manchester's own Document, playing their first show for sixteen months.

Document were about to play their biggest headline date to celebrate the release of their debut EP A Camera Wanders All Night the week lockdown first hit us last year, cutting off one of the most anticipated bands of 2020 at the knee. They, like us, no doubt, couldn't imagine then it'd be another sixteen months before we saw them again, but as they take to the stage in Yes, playing with VLURE who'd they played their last gig with, they very much seem intent of making up for lost time.

Their nine-song set features four of the tracks from that EP - The World Until Yesterday, Uncle Sam's Daughter and The Spy Who Came In From The Cold grouped together mid-set and the fraught energy of Pity as the penultimate track - yet it's the other five tracks that show that Document have spent time wisely building a set of songs to take on the world, or for the here and now, the rest of the country as they head out on an August tour. 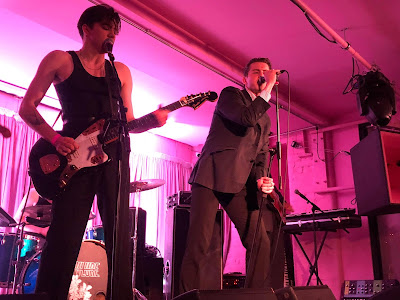 Alex is a dramatic front man; both in vocal delivery and stage persona whilst his band, despite the intricacy of some of the guitar work getting lost in volume and Yes's often muddy sound, provide a huge canvas on which to weave them around. One minute the rough beauty of Blessing, the next Pity's two-minute barked call-to-arms, they demonstrate that they're a band insistent on ensuring the audience are uncertain about their next move whilst their set-closing Nightclub takes us on a winding six-minute journey through the creative essence of the band and leaves us awaiting their next move.

There's a risk of using up all the superlatives about VLURE too soon, about putting too much expectation on their broad shoulders, but it's an almost impossible task not to be drawn in by them, a magnetic power than emanates from Hamish as he stands there, completely lost in the moment, subservient to the music of his four bandmates taking control of his mind and body and forcibly expelling the demons that reside within these songs. He stands there, demanding from their audience, that we give in too and it's impossible to resist even without the thrill and intensity of close contact.

Opening with a poem about the band from tour manager Euan, who then leaves the stage after butting heads and embracing Hamish who joins as it comes to an end, VLURE aim for the jugular with Desire, their first ever offering to the world at the tail end of 2019. So much has changed since then; the connection that VLURE make is even more critical now, a symbiotic relationship between band and audience. Like many great bands, there's a contrast between front man and band; Conor, Niall, Alex and Carlo very much do their own thing; that heightens the tension and excitement they create. They're the only people in the building not transfixed as Hamish stands tall, shirtless, at the front of the stage, urging us on, drags his trailing cable around us as he seeks connections with those further back and beats his chest to ensure nothing is left inside by the end. 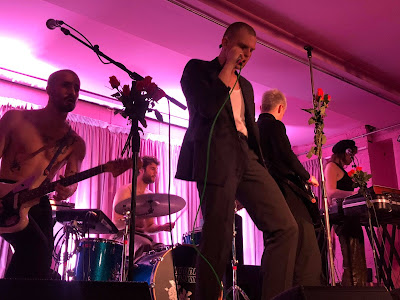 A band is nothing without songs though, whatever their stage presence - and VLURE have an armoury of those for the battles ahead. Songs like Heartbeat, Forever and The Storm both possess a fragility that anyone exploring their own innermost thoughts and feelings will recognise, but which the performance of turns it round into a strength - a facing of demons head on as the best way of winning, or at least coping with the strange fucked-up world we're existing in and the high self-set expectations of it.

They make you want to dance in the way Hamish loses himself in the beats and riffs of these songs and they make you want to reach out and hug him when the mood changes from the uplifting to the downer. They are a lightning rod of human emotions, the basest and most compelling level at which music connects people and as they close the main set on Euphoria 94, they remind us of the highs that music can give us that you can't get anywhere else. It's too much for some as the encore sees a mosh develop in the middle of the room as Desire is repeated (a reminder that they're still in nascent form as a band with just eight songs - plus their cover of Faithless' God Is A DJ - to their name).

VLURE have found a magic formula, there's hints of so many influences here, but like the very best mix-tape, what comes out is even more original and vital than its component pieces. Uncompromisingly powerful in their delivery yet painfully vulnerable in their message, they may just well be the perfect shot in the arm that music lovers need right now.