Fair Play Festival took place across five venues in the Northern Quarter of Manchester on Saturday. The sold out festival rekindled the spirit of the sadly departed A Carefully Planned Festival by mixing artists operating at the fringes of the local scene that fall under the radar of most festival organisers with touring bands from the UK and further afield. Dipping in and out around other commitments we caught three very different acts in locals YAANG, Amsterdam's Global Charming and Brighton's Ditz. 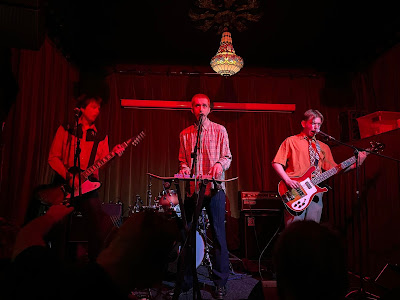 YAANG are the first band we catch and the trio have been around the country touring and have come home to a full room at four thirty in the afternoon with the sunshine outside. With two live guitars and blistering samples, Davey, Oliver and Ben have the audience moving around to the likes of recent single White Socks Yellow, an ode to pissing yourself, an instrumental named after CBBC and Tracy Beaker, Lose Hold Of You and opener Security Dave as well as their cover of Peaches' Fuck The Pain Away. As they finish with a song that has us singing along "Sex, Shop, Doom, Pop" whilst an audience member has taken Oliver's guitar to deliver a solo that fights with the synths and two of them are now shirtless, there's a huge roar at the end that very much tells us they've won over the uninitiated. 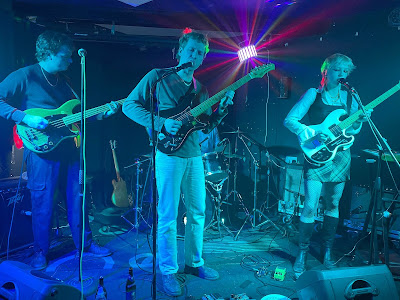 Our next band is Amsterdam’s Global Charming in the Peer Hat basement, where we’ve discovered plenty of great new music in the past, and they prove the theory that if you just wander around these type of festivals you’ll chance upon the most amazing new artists. Incredibly tight, with a wonderful energy coursing through their songs, wiry, angular guitars fighting with synths, powerful rhythmic drumming and vocals, Jilles as lead and guitarist / synth player Sara providing backing combining perfectly, they rattle through ten songs in half an hour that nod to their influences but have their own personality written large across them. Highlights are opening track Office Hell, No Compromise and the glorious finale of Celebration, but in all honesty the quality of the set never dips once. They try in vain to get the crowd to dance, but that doesn't mean that everyone in the room isn't hugely impressed by them. 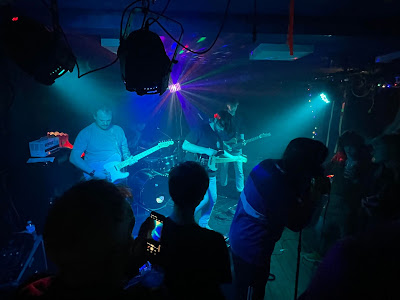 Ditz are our final band of the night, once again in the packed Peer Hat basement on the recommendation of people we trust and, as usual, they're not wrong. Firmly rooted in post-punk but with the power and performance to stand out from the crowd, or in their case with Cal, actually in the crowd as with a huge array of pedals, there simply isn't place for their front man on the stage itself. Taking songs primarily from their recently released The Great Regression album as well as early singles, the homophobe bashing Gayboy and Total 90, they deliver in a masterclass in combining ferocious intense noise that builds and threatens to overwhelm the tiny room at points with moments of melody and clarity as Cal wanders amongst us. They finish with Summer Of The Shark and The Great Regression's final track No Thanks, I'm Full that's drawn out, sprawling and drops then comes back in at the end for the kill.
YAANG are on Facebook and Twitter.
Global Charming are on Facebook.
Ditz's website can be found here and they are on Facebook and Twitter.
________________________________