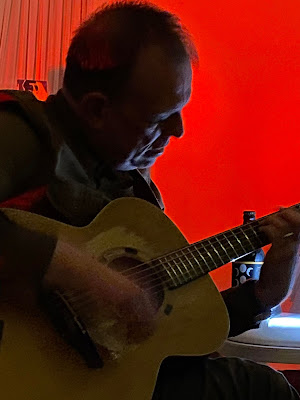 Tom Hingley brought his solo show to the east coast of Scotland this week. Stuart Ralston went to Leith for a stunning career spanning set, not only celebrating his past but also celebrating his future with a clutch of brand new songs.  Although there was a stage with a PA, Tom took the decision to body swerve it and pull up a chair in front of the audience, delivering a more personal, revealing and intimate show.

Tom Hingley is no stranger to Scotland’s east coast and made a welcome return to Fife the previous night. This evening’s performance in Leith in the prestigious Old Dr Bell’s Baths was a more sedate affair with Tom showcasing no fewer than six new songs he’s currently working on.

Of course, it’s old favourites like This Is How It Feels and She Comes In The Fall that get the biggest reactions from the crowd in this beautiful intimate venue. Saturn 5 opens the show. These stripped down Inspiral Carpets songs always allow Tom’s voice to take centre stage but it’s on new songs like Born Again where he really shines, demonstrating his full dynamic vocal range. Born Again is a reflective, biographical and heartfelt song. It features some fine, intricate guitar work too. On this form, his next solo album is shaping up to be his best yet, which is some accolade given his back catalogue includes the superb acoustic collections Thames Valley Delta Blues and Sand.

This Is How It Feels sees Tom and audience unite as one. It’s anthemic and communal, highlighting a real bond between crowd and performer. Tom has time to throw in a couple of covers too - Wild Is The Wind, popularised by Nina Simone and David Bowie respectively and Yazoo’s Only You - making them his own and again showcasing his fine voice.

Another Bird On The Wire takes its lead from Leonard Cohen and is another powerful new one, even managing to top Born Again and gets a tremendous reception from the audience. Tom reveals he is currently recording an album with friend and former Too Much Texas band mate, the guitarist Gordon MacKay and some of the new songs will feature on that.

Having been a singer, songwriter and performer for over thirty years, the beauty of a Tom Hingley show is that you never know what you are going to get with so much material to choose from. Sun Don’t Shine, the vintage Inspiral Carpets song from their legendary 1987 demo tape, first recorded a couple of years before Tom joined the band, makes a surprise appearance with Tom commenting that Steve (Holt) performs it better. To be fair, they both nail it and it’s a treat to hear it stripped back.

Dragging Me Down sees Tom back on familiar territory before an impassioned Leaving It All Behind - one of Tom’s best solo songs to date. The set concludes with She Comes In The Fall and another new one dedicated to Gordon Mackay’s Dad. The crowd duly show their appreciation.

Tonight’s show was much delayed because of covid restrictions but was well worth the wait with Tom on top form sharing not only new songs but amusing anecdotes about Robbie Williams tribute acts and Chesney Hawkes thrown in too. A fine performance and we eagerly await the new album.