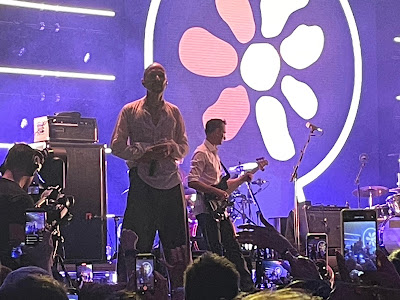 James played the first of two Portuguese shows that were COVID-delayed from December on Thursday night at a sold-out ecstatic Superbock Arena in Porto with a career-spanning set of old favourites as well as a significant chunk of last year's All The Colours Of You album supported by The Slow Readers Club making their Portuguese debut and local artist Surma. 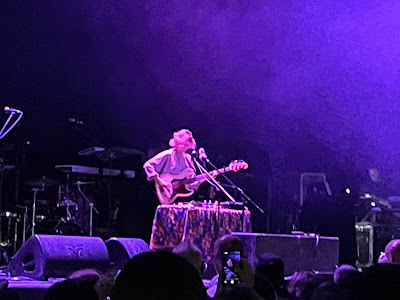 Surma opens up the evening with a short solo twenty-minute set of her with a guitar, box of tricks on a table in front of her and a bewitching vocal style that's intriguing and out of the ordinary. One of the people we're with describes her as a "Portuguese Bjork" and whilst the guitars make it a little heavier it's not too wide of the mark as a starting point. The crowd is already busy and warm to her innovative flowing pieces of music that are delivered with a real energy and passion, lost in her own world and not overwhelmed by the masses of people in front of her.
This is the first time The Slow Readers Club have played Portugal but you wouldn't know it from the audience's reaction to them, engaging, arms raised at the moments the songs hit their euphoric moments, roaring with appreciation at the end of each and actually paying attention to the support bands in a way that would put UK audiences to shame. They have issues at the start with a very heavy bass sound but that doesn't impact the reaction they get to a forty-minute selection from across their now significant body of work. From Block Out The Sun from their debut, through the glorious Forever In Your Debt (dedicated to James for giving them the game-changing opportunity to support them they took so impressively in 2016) and I Saw A Ghost from Cavalcade, You Opened Up My Heart and Lunatic from its breakthrough follow-up Build A Tower, All I Hear, The Wait and Jericho from their top 10 The Joy Of The Return right through to recent standalone single Tell No Lies. The fact there's a whole list of songs that really represent what they are about now they didn't play tells their own story about how far they've come. 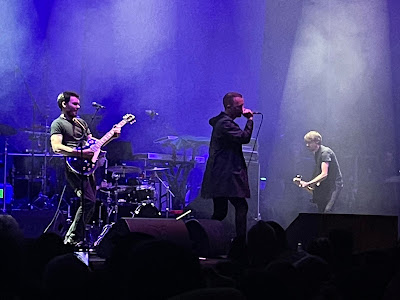 That's underlined by the fact that despite not having their own light show and full backline they don't look or sound out of place up on this big stage in a foreign country in front of an audience, the majority of whom will never have seen them before. They win them over, like they always do, proving the adage that sometimes the most difficult task for an artist is simply to have someone hear your music. The songs hit you straight away, they go for the base emotions, merging the darkness of the lyrics with an uplifting music that really captures the heart and mind and, like here, they do it with a honest humility that draws people towards them. The Portuguese crowd adore them, hands raised in their thousands clapping along to songs that the majority of them don't know because that's what their instinctive reaction to it is.
The Slow Readers Club played The Wait, You Opened Up My Heart, Plant The Seed, All I Hear, Jericho, Forever In Your Debt, Tell No Lies. Block Out The Sun, I Saw A Ghost and Lunatic. 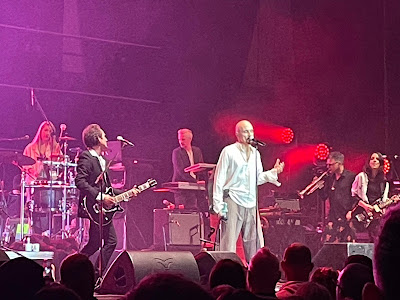 Outside of the UK, Portugal is the place that's taken James to their heart more than any other. Selling out ten thousand capacity venues and headlining festivals is the norm for them and whilst their UK audience can often treat them as a legacy band demanding the big hits from yesteryear as part of the nostalgia for the nineties that all bands that made their name in that period suffer from to some extent, the Portuguese audience is more open to the spirit of James. Which is improvisation, changing the set list, insisting on playing new songs that may not have the familiarity element of some of their best known songs, getting away with it all messed up as the title of one of their slow burners from the end of that period exalts us to do. A case in point is mid-set when Destiny Calling, one of the most requested songs that hasn't been played for a long time from the UK audiences as it heralded the launch of their Best Of in 1998 and a renaissance in the band's fortunes, is followed by a euphoric Curse Curse from 2014's La Petite Mort. The latter sets the crowd on fire, the energy from the stage transmitting itself immediately and the whole place is bouncing, the former warmly received but without the euphoria of what follows it. There's none of the singalongs to the likes of Sometimes or Many Faces that rarely fail to materialise back home in the UK and the experience is the better for it.
If James are under-rehearsed after not playing for four months it's impossible to tell. This nine-headed version of the band, with Debbie and Chloe now fully integrated and giving the band a new energy and creative options they lacked without them, have an intuitive bond that has always characterised James when they're at their best and most fluid. Tim prowls the stage, encouraging, whether it be up on Dave's drum riser during Walk Like You, eyeballing Saul as he delivers a phenomenal violin solo during a revisited and reinvigorated Out To Get You that has ten thousand of us awestruck as they cut loose from the boundaries of the recorded version of the song and take it to new places. 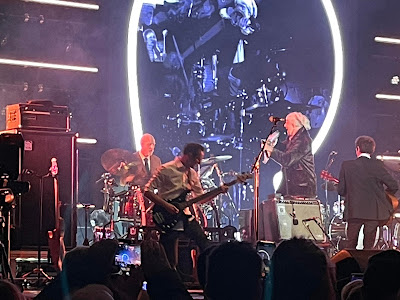 The set is a real mix, going all the way back to second single Hymn From A Village where Debbie is brought forward on a drum riser and the dual drum approach to it adds vigour and energy and brings it to life through to five songs from All The Colours Of You that still betray their birth marks and the band's restless need to adapt and evolve them. In between there's a mix of singles from across the intervening years - the Seven tracks Born Of Frustration and Ring The Bells seem to hit home particularly hard with the Porto crowd - with a few deeper cuts like Walk Like You that they have tapped into the song's primitive energy in a way they never quite managed at the time of its release and a timeless Five-O where Saul's violin once again takes centre stage but with Debbie adding bongos, a much maligned instrument, to the mix. Runaground, the superior of the two Best Of singles from 1998, also gets resurrected, perhaps with their summer show recreating their Barrowlands set of the same year in mind, and given a harder edge with three guitars in the mix.
It's past the midnight curfew by the time band finish (although there's no need to rush for last minute transport here unlike back home when the world stops around eleven o'clock) with a rousing combination of Ring The Bells that has the whole place up on their feet and bouncing and a slightly subdued in comparison Laid. The look on the band's faces as they take a lingering au revoir from the crowd very much confirms a very special and mutual bond of true love between James and their Portuguese crowd, borne of appreciation on one side by the fact the band treat here like their second home and play where others don't venture this far west across the Iberian peninsula, on the other by the audience's willingness to take the band for what and who they are, coming with open hearts and minds and not arriving with expectations of this song or that song being in the set and having their night ruined by their absence. It's a perfect and beautiful symbiotic love affair.
James played Zero, Isabella, She's A Star, Born Of Frustration, Wherever It Takes Us, Come Home, Walk Like You, Runaground, Five-O, Destiny Calling, Curse Curse, Hymn From A Village, Out To Get You, All The Colours Of You, Many Faces, Moving On, Beautiful Beaches, Getting Away With It (All Messed Up), Sometimes, Ring The Bells and Laid.