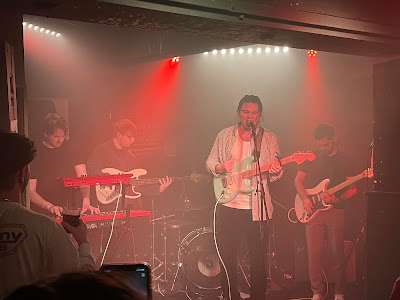 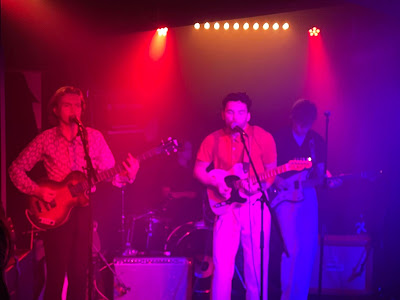 First Lady, who have undergone a change of identity from The Riot Vans a couple of months ago, are first up having made the trip down from Glasgow and they play a really well-received energetic set to a small crowd who love them. Interchanging vocalists throughout the set with immediate big hooks around which they hang songs that you find yourself involuntarily tapping your feet to before you realise and playing with a real joy and energy, they’re a perfect opener. Pastel Blue is a particular standout of a set that was deserving of a much bigger audience than they got. 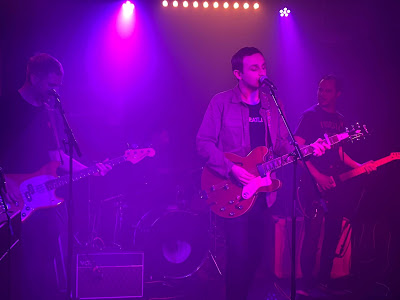 Civic Green are next up and whilst they might not possess the showmanship element of the other two bands they have a very deep-rooted love of classic songwriting that serves them in excellent stead. Danny has a vocal that’s perfectly atuned to these songs about being Northern and working class yet retaining an optimism that things will get better. Songs like City Streets, Nothing In My Way, last single Nothing Close and the final highlight There Is Always A Light, the majority of the set taken from an upcoming EP they’re releasing in June, are impressively constructed and delivered with power and precision by the four of them. They don’t seek to reinvent the wheel but they do what they do very well indeed. 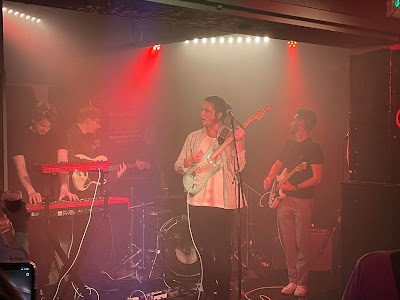 The room fills up a bit for The Silver Bars and it’s clear a few have been overindulging while not watching the first two bands as their own pissed Bez provides a distraction early in the set before one of his mates gets fed up with him and sits him down. We’ve all been there mate.
It does distract from an uplifting set from The Silver Bars that does make you want to dance, even if like us you’re unfamiliar with them beforehand. They run pretty much everything they’ve released, eight singles in total, The Sunshine Lounge and their most recent offering Long Night being the pick of the bunch and end up covering The Doors for an impromptu encore that’s demanded of them by a crowd that finally gives them their full attention.
Dylan is an energetic passionate frontman who’s clearly living out his best life at the helm of a bunch of close knit mates and the big bank of keys that Phil stands behind dictates a lot of their sound and enables them to create something that makes them stand out with an identity of their own whilst the rhythm section is tight and adds a powerful groove to their sound.
It’s a little disappointing that a trio of excellent bands pulled a small audience but that’s the reality of the difficulties facing bands playing out of town these days when times are hard. Promoters tend to go for safe bets of local bands, and one may well have boosted numbers, but that cuts down on opportunities to play to new audiences outside a circle of friends that’s critical for bands to break and expand so tonight’s (In Your Ears) have to be commended for taking a chance on them.
The Silver Bars are on Facebook and Twitter.
Civic Green are on Facebook and Twitter.
First Lady are on Facebook and Twitter.
________________________________
Follow Even The Stars on Twitter at @eventhestarsuk and like our Facebook page for all the latest updates.
Posted by Even The Stars at 22:12