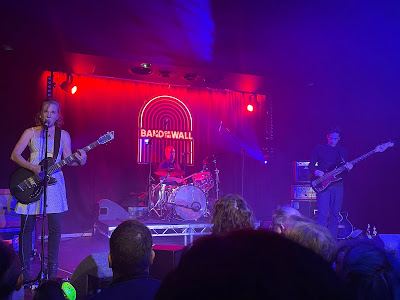 Kristin Hersh made a long-awaited return to Manchester on Thursday night as part of the first half of her UK tour performing with long-term Throwing Muses collaborator Fred Abong and 50 Foot Wave drummer Rob Ahlers.
Kristin's setlist is a mix of more recent Throwing Muses songs, five of the nine coming from last year's Sun Racket album and a couple of tracks each from her last two solo records Possible Dust Clouds and Crooked and from the 50 Foot Wave project. She's at that point in her career, and she'd likely baulk at the word given she's spent the vast part of her musical life as the anthesis of the rock star the industry wanted her to become around the time of both Hunkpapa and University, where she can play what she chooses rather than some of the older crowd pleasers that many in the crowd would have seen her play with Throwing Muses at some of their early legendary gigs around town over thirty years ago.
Whilst the ferocity of the performance might not be quite as exhilarating and the crowd's reaction a little more subdued than the boisterous mosh pits of those days, the intensity of the performance is hardly diminished. Kristin delivers the first half of the set in that world where she stares out into the middle distance and lets the song take control of her. Whilst it's an electric trio that doesn't mean a full-on aural assault but a more measured but not less powerful approach as the opening 50 Foot Wave track Bug followed by the Sun Racket trio of By Water, Bo Diddley Bridge and Dark Blue seduce where once we would be blasted with a wall of noise. 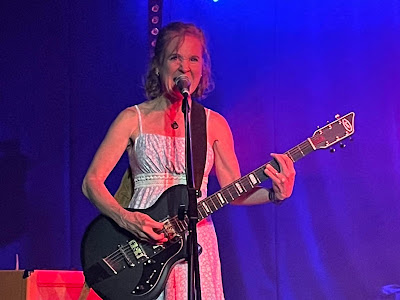 Things are turned up and accelerated as the set reaches its conclusion though - Bright Yellow Gun, the lead single from their one top ten UK album University, is the one real concession to those that want to relive the past. It's the one moment where the audience sing along en masse. It's swiftly followed by the newest song of the night - the intense fireball of Staring At The Sun from 50 Foot Wave's Black Pearl album that was released a couple of weeks ago that then leads into LAX ("about the world's best worst, or worst best airport" Rob laughs) and the claustrophobic Tulum before finishing the main part of the set with Sun Racket's stand out track Kay Catherine.
The encore is short and sweet, starting with Crooked and then finishing the night with Shark, the oft-overlooked lead single from University's superior but less successful follow-up Limbo. Rob and Fred swap instruments, joking with each other, a sign of the real camaraderie and natural connection that the three musicians on stage have - and that transmits to an audience that treat Kristin with the love and respect she deserves as a fiercely independent artist committed to doing exactly her own thing and long may it continue.
Kristin Hersh Electric Trio played Bug, Sunray, By Water, Bo Diddley Bridge, Dark Blue, Mississippi Kite, Maria Laguna, Snakeface, Bright Yellow Gun, Staring At The Sun, LAX, Tulum, Kay Catherine, Crooked and Shark.
Kristin Hersh's official website can be found here and she is also on Facebook and Twitter. Details of her Strange Angels subscription program can be found on this link.
The electric shows continue at Leeds Brudenell Social Club (April 29), Birmingham Hare And Hounds (30), Oxford The Bullingdon (May 1), Nottingham Rescue Rooms (2), Bristol The Fleece (3), Cardiff Clwb Ifor Bach (4) and Brighton Komedia (5).
Then she moves to solo acoustic shows at Colchester Arts Centre (May 7), Norwich Arts Centre (8), High Wycombe Arts Centre (9), Leek Foxlowe Arts Centre (10), Hebden Bridge Trades Club (11), Woking Fiery Bird (12), Reading South Street Arts (13) and Canterbury The Gulbenkian (14) before heading to Europe and back to the US.
________________________________
Follow Even The Stars on Twitter at @eventhestarsuk and like our Facebook page for all the latest updates
Posted by Even The Stars at 00:35