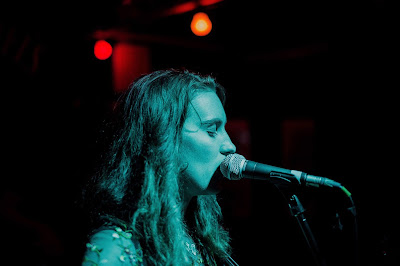 This is the first time we've seen Finola play live since we wandered past a tent she was playing in at Headlander Festival in Stockport back in the summer of 2015 and were drawn in by her voice. So we're a bit apprehensive of whether the reality will match the memory, but we had no need to worry. Right from the start her voice, expressive, emotional and living every single word of the songs as if they happened to her just moments ago, silences most of the room and people actually listen to her.

The songs from Waterworks are given a cortisone boost by the band, who add menace to the words of the likes of Shotgun and Coming For You, songs about an angry young woman looking for revenge on those who have crossed her and depth and drama to the EP's title track which concludes the main set. They're also given substantial lift by Abbey's backing vocals. As Waterworks reaches its end Finola disappears and then comes back with a sax to bring the song to its conclusion in a crescendo of brass before the audience demand that they stay on stage. They do and perform their second cover of the night, a fun, not-too-serious take on Britney Spears' Hit Me One More Time.  The first, Bring Me The Horizon's Drown, is an interesting take on the song, but in all honesty feels like a place holder until there's more songs of their own to flesh out the set.

The songs are personal, whether it be the ones where she's angry and seeking revenge (and she jokes that this is sort of a theme that runs through some of them) or the wonderful new song Losing Value. She doesn't go into specifics about what it's about, but it's clearly dealing with the emotional fallout of a relationship that didn't go as she wanted, and the impact on self-esteem that has. It looks from where we're stood like she's close to tears as she sings it, but in a venue that's more associated with rock and roll hedonism, it's a beautiful raw moment of laying everything on the line as some form of catharsis. It's incredibly brave and rare to see any artist allowing themselves to be so vulnerable in front of their audience.

It's difficult for an act like Finola to make their mark in Manchester, nothing to do with the quality of the songs or the performance, because there's no doubt about either of those, but in a scene that's being compartmentalised into genres and into groupings that put a fence around their own, the fully DIY ethos is hard to make a success of. Hopefully the packed room in Jimmy's tells its own story here, because Finola is a unique talent with a voice and an ability to tell the most personal stories that you can relate to yourself that deserves a bigger stage.

Our review of the Waterworks EP can be found here.