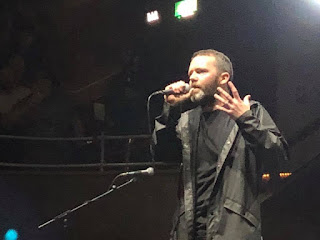 The Albert Hall is the place to play in Manchester. Bands downsize their Manchester dates to experience the atmosphere that it can create. Tonight though is about four of this city's sons and consequently the mood is a celebratory one. Unsigned when this gig sold out a couple of months in advance, the chants of READERS drown out the music that's playing in the intermission. This feels like a night that's going to live in the memories of every single person in the building. This is about the triumph of the DIY spirit, of word of mouth, of the local radio and blogging community that have championed this band in the face of indifference from the powers that be for years. Things have changed though, The Slow Readers Club have changed, they're set to be a major player in 2018 and this gig showed exactly why.

They start with Fool For Your Philosophy, one of the seemingly endless stream of anthemic tracks that make up their second album Cavalcade, a record we remind you that hasn't actually seen a record store release yet has brought them to over five thousand people in the course of the last few weeks across the country. People know every word, the sound is absolutely spot on, you can hear the pummeling punishing military drum and bass of David and Jim that set the marching tone to which Aaron stomps throughout whilst Kurtis, nonchalantly cool as ever, weaves his guitar patterns over the top. Aaron's almost drowned out down the front by everyone singing every single word as if it's their last. Friends are hugging each other, strangers are hugging each other, linking arms, waving hats in the air. Whilst more celebrated bands have come here and sold this place out, I bet there's not been such an outpouring of love under this roof.

The songs are what do The Slow Readers Club bidding for them. They don't have b-sides, they don't have album tracks, every single song is at a level that connects to both the mind and the heart. That's why there's people all around Manchester and beyond feeling hoarse this morning. You can reel off a setlist without a weak moment. There's that run of Cavalcade singles - Start Again with its now de-rigeur clock movement of the arm that signals in the chorus, Plant The Seed and their closing salvo of Forever In Your Debt and I Saw A Ghost that are the stuff of stadium bands but with the love, the personality and the genuine feeling still very much alive and kicking. But then there's Grace Of God, Cavalcade and Know The Day Will Come that could have equally been released as such. And then there's the set of songs from their debut album that often gets overlooked, but how can you when there's songs like Feet On Fire, Sirens, One More Minute, Block Out The Sun and Lost Boys on there? Songs that have graced every single magnificent small venue in this city that support the music scene and from which The Slow Readers Club have come.

With everything they've achieved so far, the hardest part though is now. There's expectations on them to deliver a record as stunning as Cavalcade now they're signed and getting radio play. Recent single Lunatic and Through The Shadows, which has been in the set for a year or so, have served to quell any concern that the pressure might get to them. Not The Only One leaves a similar thought in the head, but it's You Opened Up My Heart that is going to be the one. Its immediacy has grabbed audiences throughout this tour, building to a climax where hands are raised to clap like an involuntary Pavlov's dog style reaction and the line "believe enough to lose control, where there's love, there's always hope." When it's released as a single next year, it's going to be a game-changer in the way so many things have changed the world for The Slow Readers Club this year.

As the night comes to an end the chants of READERS are deafening as the band take their final bow. I don't think they or us ever imagined in their wildest dreams that something like this would ever happen, but it feels now like it's a step on a journey that could take them anywhere. This is a band of the people, a band that bring people together and create love through the medium of their songs that are dark in content, but absolutely celebratory in their delivery. Back in May, in the wake of the arena bombing, Aaron said at their Dot To Dot appearance that "Manchester will never stop singing." It's one of his, and his band's, songs that we'll be singing.

The Slow Readers Club played Fool For Your Philosophy, Sirens, Start Again, Grace Of God, Not The Only One, One More Minute, Feet On Fire, Through The Shadows, Plant The Seed, Lost Boys, Block Out The Sun, Lunatic, You Opened Up My Heart, Know The Day Will Come, Cavalcade, Forever In Your Debt and I Saw A Ghost.