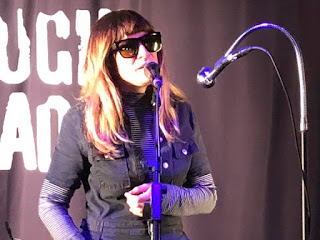 After the pop-leanings of her previous album Slow Phaser, Goodnight Rhonda Lee was something of a departure for Nicole, a record very much drenched in soul influences, something that allowed her voice to take centre stage. In this stripped-down format, with friends Davey on keyboards and Steven on guitars, she jokes that it's going to be difficult to play soul music, but they more than accomplish it.

The album's title track opens up proceedings and sets the tone. The audience, a mix of fans and curious shop visitors are captivated immediately. The song finishes in a "cha cha cha" and there's a moment of silence before the applause kicks in. She winces, telling us that she's damaged her shoulder in a tour bus incident recently, but you couldn't tell from the performance. I Love Living Here (Even When I Don't) follows and is a tale of her moving out of Asbury Park ("the best place with the worst people") back home in the States. It's a keyboard heavy song, Davey setting the pace and direction of the song, but leaving Nicole all the room in the world to deliver that vocal. 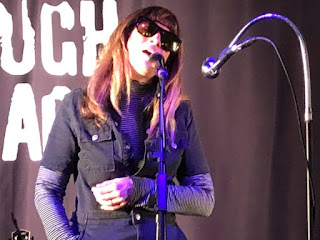 Despite the obvious pain, she's on good form throughout, joking about Revenge Of The Nerds and having to update her cultural references for her trip to Europe. The standout song of the set is the Chris Isaak co-write A Little Crazy, where everyone is stunned into silence by the emotional range and control of Nicole's voice as she soars through the high notes. She jokes that Brokedown Luck sounds like the Fragile Rock theme tune and the ending like the Rocky theme, but that's down to her earthly self-deprecation rather than any real resemblance. The confessional A Night Of Serious Drinking tells of the breakdown of a relationship ruined by too much alcohol and you can sense the pain and hurt in every word she sings.

Before the final song A Dream Without Pain, "the final part of the 'please don't die' trilogy" Nicole tells us, she reveals that she's coming back in March to do a fuller tour, something that fills us with joy as such an underrated and under appreciated voice simply needs to be heard and loved by a wider audience. We challenge you not to listen to her voice and not fall for it.