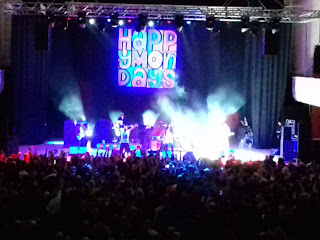 I haven't seen the Mondays since 1999, when a revised line up, including an on-stage musical director choreographed them through a well received set. Fast forward to 2017 and they're back playing a massive tour, sounding better than ever.

Dundee’s Caird Hall has undergone something of a renaissance in recent times and seems to be attracting more and more gigs. Friday saw a bit of a coup as they managed to bag the first date of the Mondays tour. Promising a greatest hits set, The Mondays kicked off with an extended Loose Fit, with Shaun Ryder ambling on stage minutes after his band mates have started grooving. Joined by Rowetta on vocals, she still has a beautiful, powerful voice and Bez, still being Bez but cleaned up.

Paul Ryder, the Mondays legendary bass player immediately starts knocking out his trademark bass lines and is complemented throughout the show by his big brother Shaun. Joining Paul in recreating the Mondays fusion of rock, dance and Northern Soul, are drummer Gaz Whelan and guitarist Mark Day. The trio are the unsung heroes of the Mondays. Day has a unique style and throughout the opening trio of Loose Fit, Kinky Afro and Dennis & Lois, his funky wah wah driven sounds are delightful.

Shaun seems to play the fool for most of the evening, acting as if he’s never seen the set list before and asking the band if they can remember how to play some of the songs in the set. He doesn't speak favourably of the oldest songs - Tart Tart and Freaky Dancing - dismissing them in the most derogatory of terms yet they are amongst the set highlights, showing us the roots of the Mondays. Ryder's snarling vocals on Tart Tart, where he's half singing and half speaking are just as raw and fresh as they were way back 30 years ago. That's not to say the Mondays are more polished - they have successfully managed to capture the sound that won them a massive fan base in the late 80s without becoming a contrived nostalgia act and for that I applaud them.

The set draws heavily from their most commercially successful period with 8 cuts from Pills N Thrills and Bellyaches and three from the Madchester Rave On EP of which Clap Your Hands sounds the most spectacular. Step On, unsurprisingly gets the best reaction from the not quite sold out crowd, yet it possibly sounds the only song in the set that's dated. Still, I’m clearly in the minority.

The two song encore is worth the admission price alone - the club mix of Hallelujah is greeted with a massive cheer before Wrote For Luck rounds the evening off. Shaun is in fine voice all night and tonight is a real team performance. There’s no attempt to create something new. With a back catalogue like The Mondays,there's no need to. They don't sound dated nor do they sound like they are going through the motions. There's still a vibrancy and an edge to The Mondays that other bands lack.  A welcome return for a much loved band.