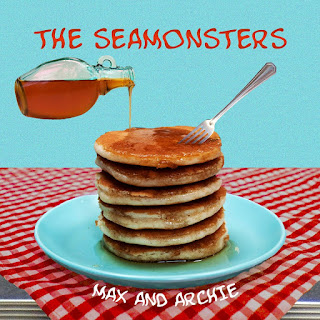 
The Seamonsters are Naomi Mann (lead vocals), Lauren Smith (bass/backing vocals), Holly Thompson (lead guitar), Tassie Drobinski (rhythm guitar), Ella Taylor (keyboard) and Ciara Hurding (drums). They formed in 2013 in Sheffield and have employed DIY methods to share their work so far with local support slots for the likes of Anteros, Bayonet and High Hazels and

Max And Archie is their third single, following on from Lost (And Found) and Wonderland and continues their penchant for quirky and colourful artwork that matches the mood of their songs. To judge them though on that and their equally vibrant promo photos and the joyful way the song stops and starts, never goes back to the same point and refuses to play by standard song structure rules would be to underestimate the no-shit-taking attitude that reveals itself in Max And Archie's kiss off line "Max And Archie, who the fuck do you think you are?"

The Seamonsters are on Facebook and Twitter. They support High Hazels at Yellow Arch Studios in Sheffield on Friday (November 10).