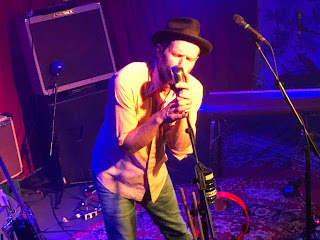 David Ford returned to Manchester's Deaf Institute for the final night of his tour in support of his fifth album Animal Spirits. A twelve-song set was split 50/50 with songs from the album and tracks from his back catalogue and a surprise Beach Boys cover with support act Michele Stodart of The Magic Numbers.

If ever you were going to use the adjective "unassuming" in describing a musician, you'd be hard placed to find a more appropriate place than in front of David Ford's name. For the best part of a decade and a half he's been plying his trade to a loyal bunch of fans, drawn in by the remarkable intellect and no little wit of a man who sings from the heart and mind and who always seems genuinely taken aback that someone can relate or connect to these songs.

Animal Spirits is a concept album of sorts. Its headline is that it's an album about macroeconomic theory, but as David points out, joking that the doors need to be locked to stop people leaving, it's about how the concepts behind the theories can be applied to everyday life and the issues we face on a daily basis. He gives us the thought that the economy and predictions about it are only as reliable as the people in it and that we're all crazy, individual and unpredictable too, and that the Animal Spirits title comes from that theory that you can't control humans. It's an apolitical statement though as he states very clearly when introducing Real Damn Slow as a song about rejecting short-termism, whether it be economic or something like X Factor before adding it starts with a cowbell like most of the greatest songs ever written. 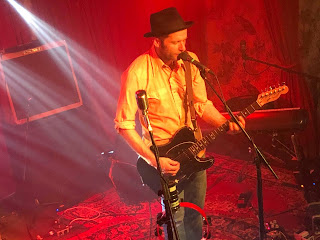 This is a one-man show, guitar, keyboard, harmonica, vocal harmonies, and whatever new gadget David's creative mind has fashioned are all cycled through a loop machine to allow the songs he chooses to attack from this angle to build. Set opener Downmarket sets this tone, a very slow build into the album's opening track that makes it twice the length of its recorded version. It's a common theme that runs through a large section of the set, allowing the songs to take on their own unique life. The album's title track Animal Spirits is a case in point, turned into an angry rock and roll polemic set to a simple but punchy riff on the loop, whilst Real Damn Slow expands into an everything but the kitchen sink romp.

State Of The Union, the song with which David introduced himself as a solo artist with fifteen years ago, still feels as relevant and pointed as it did back then given we're living through an era of Trump and the Brexit vote fall out. Somehow, he still manages to create a new fresh and vibrant slant on it through improvising sections of the song. The penultimate track The Ballad Of Miss Lily threatens to surpass it for dramatic intent though as it builds to a massive climax. 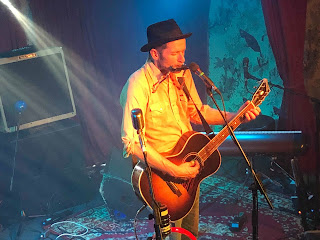 Not all songs take the looping treatment though, Isn't It Strange has just a guitar with a hard edge to it, echoing the stark lyrics of the song, a style taking further when Why Don't You Answer Your Telephone makes maximum use of the guitar pedals to create a rasping intensity that's both unsettling and infinitely powerful. Waiting For The Storm is more laid back, a gorgeous acoustic strum imparting the warmth of both the lyrics and emphasizing the expressive nature of David's voice whilst We Always Knew is a beautifully stark and emotion-laden piano ballad that cuts through the steaming heat of the respectfully silent Deaf Institute air. The warmth in these songs shines through in the between song chat too, not David's most natural habitat, but one which he tackles with a genuine disarming nature.

He invites Michele on stage to play bass and sing harmonies with him on debut album track I Don't Care What You Call Me and together they cover The Beach Boys' Don't Worry Baby, a song Michele played to him on the way up to Manchester in the van and which they deliver with a beautiful poignancy that has the Deaf Institute crowd silently swooning at the intertwining of their voices.

The final song of the night (and on Animal Spirits fittingly) I've Lost More Than I Ever Thought I Would Ever Hold reflects on the fact that real life things are more important than material ones. For possibly the most underrated songwriter in this country in the last fifteen years it feels like a fitting way to say goodnight for the riches from his work are not in the form of chart hits and fame and fortune, but from the adulation and the respect from audiences like this that hang on every word and every note.

David Ford played Downmarket, Isn't It Strange?, Waiting For The Storm, Animal Spirits, We Always Knew, Real Damn Slow, Why Don't You Answer Your Telephone?, State Of The Union, I Don't Care What You Call Me, Don't Worry Baby, The Ballad Of Miss Lily and I've Lost More Than I Ever Thought I Would Hold