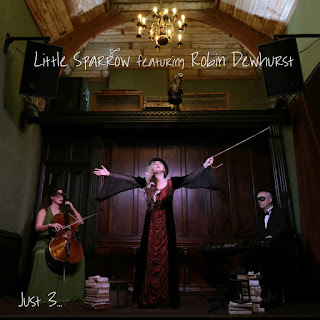 Just 3 is the first new material from Little Sparrow since her album Wishing Tree. Including lead track Tender, revealed late last year, her radical reinterpretation of Madness' Baggy Trousers that she performed with Robin Dewhurst in 2016 at Kendal Calling and another new song Dry Your Eyes, the EP showcases the power, range and beauty of her voice and provides a tempting teaser for her second album that she's in the process of recording.

This collaboration, with the three being completed by Little Sparrow (aka Katie Ware)'s long-term cellist Sarah Dale came about as a result of a suggestion by the Kendal Calling 2016 organisers that they team up with Robin Dewhurst, a classical pianist (and father of Blossoms' Josh), to cover Baggy Trousers. This was so successful that Chris Hawkins from 6 Music broadcast the recording and the idea was born to collaborate further. Just 3 is the result of that.

Baggy Trousers opens up the EP and sees the song transformed from the hedonist headrush of the original into a dramatic string and piano-laden track that captures perfectly the emotion of a child growing up at school and looking back dewy-eyed in reminscence years later.


Like many of Katie's lyrics, Tender is a deeply personal song, but one that will also be relatable for many others as it talks about coming to the terms of impending loss of someone close and how irreplaceable they will be. Its accompanying video, compiled of memories sent in by fans from a social media appeal, simply adds even greater gravitas to the words. Her stunning showstopping voice, which was very much to the fore on Wishing Tree, also takes centre stage here, each emotion being relayed in the song's lyrics given extra force and meaning by the power and control of range that she exercises throughout the song.

Dry Your Eyes is equally emotionally taut, reaching out to someone who's not at ease with the world, casting an arm around the shoulder and telling them that they're not alone and things will get better - "jumping out of the window every day, are you one of those passionate people cast away?" It's a yearning, aching song and the string / piano arrangements create a sparse yet claustrophobic environment in which every little nuance in Katie's voice can be heard, whether it be sung word or the haunting harmonies.

Little Sparrow's website can be found here where a limited edition CD run of the EP can be purchased.

It is also available on iTunes and Amazon.