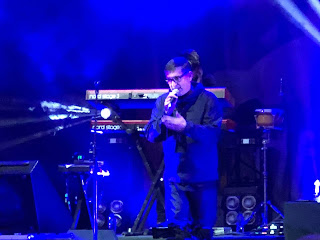 Paul Heaton and Jacqui Abbott made a triumphant return to Manchester's Castlefield Bowl as part of the Sounds Of The City. With a set spanning back to Paul's days with The Housemartins right through to a new as-yet-unreleased track, a capacity crowd bathed in the very un-Mancunian sun and paid homage to the most unassuming of musical heroes.

Towards the end of the show Paul tells us that even as far back as when The Housemartins were playing some of these songs in little clubs, they belong as much to the audience as they do to the people on stage performing them. And in that sentence he sums up just why the popularity of the acts he's performed as and with has endured. There's something in these songs that still brings people to watch and sing along in their thousands - that ability to take the most basic of human emotions experienced by one and crafting something that talks to anyone and everyone. Whether it's the still catchy and never tired songs of The Housemartins that provoke the nearest we get to a mosh pit tonight, or the battered and bruised romanticism of newer songs written with guitarist Jonny Lexus, there's something that touches people in a way most artists could only hope to. 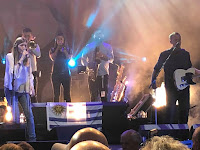 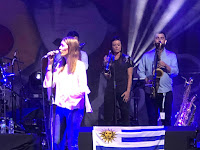 Paired up again with Jacqui Abbott, with whom the album count since he talked her back into the fold after she left The Beautiful South, it feels this is the perfect place for Paul Heaton. He's not the sole focus, how could anyone be with a voice as showstoppingly beautiful yet uncomplex as Jacqui's, and it feels that this is where he's most comfortable. His between-song chat veers from heartwarming rambling - when he chastises us for booing him when he announces they're coming towards the end of the main set because "I'm 56, I've got cheaper" and laughs at our fascination with a stopped train on the viaduct and the driver's reaction to the crowd looking up at him - to more pointed where he talks of his love of playing in cities as they come off the end of their forest tour and when he thanks support act The Buzzcocks and indirectly refers to Morrissey by saying that they don't say stupid things, cancel things and concentrate on their great songs.


There's very much a greatest hits type of feel to the night, with most of the key touchpoints in Paul's multiple personas covered in the mammoth twenty-five song set, but there's still space for five tracks from Paul and Jacqui's most recent album, last year's Crooked Calypso as well as a new song Seven Inch Singles which reminisces about the demise of vinyl jukeboxes, with Paul reciting some of his favourite artists who he'd grown up listening to on such treasured machines. There's also space, ironically, for the criminally ignored Manchester from the final The Beautiful South album Superbi, and when in the baking heat they recite suburbs of Manchester and conclude "if rain makes Britain great, then Manchester is greater"as the sun turns half the crowd beetroot red. 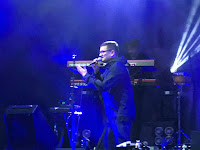 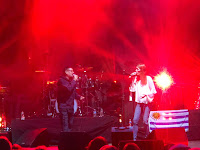 They save most of the big hitters for the end of the set and the encore. Perfect 10, augmented by a subtle but uplifting brass section and Good As Gold (Stupid As Mud) get the crowd moving, although they've been singing every word for most of the night already. Song For Whoever concludes the main set, but there's still time for more. The first encore is the contrast of the fragile beauty of A Little Time and the hedonistic headrest of Happy Hour, neither of which feel they've aged a day, before the second encore of You Keep It All In leads into a gorgeous Caravan Of Love that needs no musical accompaniment as the whole bowl becomes the stage as eight thousand people join in as the perfect sign off to the evening.

That we're still here in 2018 listening to Paul and Jacqui in our thousands is down to their humble approach and the simple quality of the songs and the connections they make. This might not be the height of rock and roll and some might sneer at them from the pavement side, but this is exactly what music should be doing in these troubled times, bringing people together and making connections.

Paul and Jacqui played I Don't See Them, The Lord Is A White Con, Sheep, One Last Love Song, People Like Us, Five Get Over Excited, Seven Inch Singles, Manchester, Rotterdam, Bow Down, I'll Sail This Ship Alone, Liar's Bar, Silence Is, DIY, Old Red Eyes Is Back, She Got The Garden, Don't Marry Her, I Gotta Praise, Perfect 10, Good As Gold (Stupid As Mud), Song For Whoever, A Little Time, Happy Hour, You Keep It All In and Caravan Of Love.