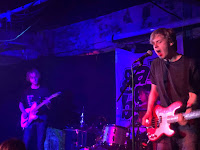 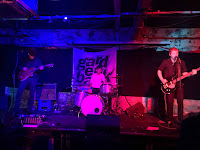 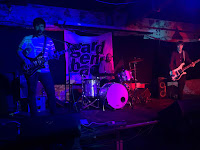 Gardenback launched their new single Health And Wellbeing with a raucous set at Manchester's Soup Kitchen on Saturday night. Supported by Carnation and Déjà Vega, their biggest headline show to date had them not only launch their single successfully, but also lay down a marker as one of the best live bands in town.

Any band putting Déjà Vega on a bill these days is a brave one. As the gentleman next to us remarks they start with a crescendo and move upwards from there. They start with a double short sharp shock of Telephone Voice and Mr Powder, the latter seeing the photographers dash to shoot Jack's mesmerising guitar work as they create jutting, piercing rhythms that get the early crowd moving. Brutally raw the onslaught continues with their recent single Eyes Of Steel, one look at Jack's steely focused gaze is enough to see just how this performance feels like an exorcism rather than a gig as Mike's understated bass and Tom's powerful punching drums drive the songs along with an unstoppable momentum that simply gathers pace as they progress. They slow things down for a metal disco track called Chasing that shows a very different side to them before ratcheting things back up for early single Pentagrams. Those familiar with them are already lost in the music, those who don't stop what they're doing and watch as the ten minute set closer The Test has more ideas and sections to it than most bands manage in their career as it careers along blowing everything out of its way, whether it be ear-bleeding loud guitars, effects twisted through the pedals or Jack's demonic delivery. 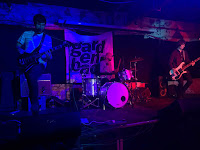 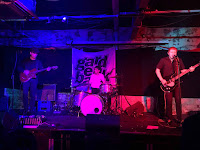 Carnation describe themselves as "something you'd punch your best mate to" but having had every bone broken by Déjà Vega beforehand, that felt like a blessed relief. What Carnation lack in threats of imminent violent breakdown they make up for in soaring anthems delivered without bombast or posturing, relying on the basics of songs that make a connection, often involuntarily on the listener's part. They overcome initial problems with guitarist Cameron's amps to deliver a six-song set that starts with their well-received debut single Fatal Attraction. It's a brave move to throw in your only single to date first up, but they've got more to their armoury than that. There's a song about spending their time in Jimmy's round the corner that's sure to resonate with the crowd that they've brought with them, but it's their closing song History, that stops dead and then kicks back in with Saul telling the crowd it's their last chance to dance, that grabs the attention most. They don't deal in big statements, their stage presence is still quite static but that will undoubtedly change as they establish themselves over the next twelve months, but they let their music do their talking for them and it seems like plenty are listening. 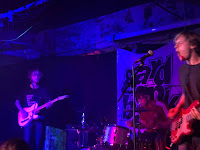 This is Gardenback's night though. There's a real energy and excitement in their set, whether it be in the previous singles Bulldogs, Sleepless, Call It A Phase and the frantic headrest of Health And Wellbeing that the evening is here to promote. Like so many bands, the live performances add an extra edge to the recorded versions of the songs that people know and love and which attracted them to check them out love. They've also got a growing number of unreleased songs now they're playing an extended set that headlining affords them that show they've still got plenty to come. Do No Evil, their opener, is already a fan favourite and a great way to kick off proceedings and a surefire future single, whilst they leave us with the equally impactful Bury Me.

They're at their most thrilling when their Ellis, Neil and Jacob's voices sing in unison and then head off at tangents against each other as the songs are propelled forward at breakneck speed by the basic means of guitar, bass and drums that they have at their disposal. They look like they're having the best time of their lives, living out their dreams and that transmits itself from the stage to the crowd. They add in a snippet of Pixies' Hey and run through a raucous cover of Talking Heads' Psycho Killer that sets the front rows dancing and by the end of the night they've broken down the barrier between crowd and audience for good. But it's their own material that will ultimately make or break them as a band and tonight sees them coming out fighting with an ambitious headline slot and a performance that shows they're more than ready for stages of this size and bigger.

Gardenback are on Facebook and Twitter. Listen to Health And Wellbeing here.  They play Leeds Verve Bar on July 12 and Kendal Calling at the end of the month.