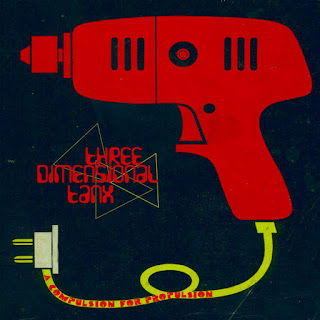 The new album by Lancaster's Three Dimensional Tanx is a joy from start to finish. Stuart Ralston loves it and you should too.

The psych movement in the UK is thriving at the moment. There are so many new and established bands releasing delightful records and creating a buzz at their live events. Back in April, when The Lucid Dream played their biggest ever Manchester show at a hot and sweaty Band on the Wall, the Cumbrians invited two of their favourite bands to join them – excellent new band Pale Rider and veterans Three Dimensional Tanx. Both bands went down a storm with the audience. 3D Tanx created an exhilarating stage show, with their manic dress wearing drummer Loz at the centre of attention. His on stage antics merely added to the joys and delights we witnessed and heard. They have just recorded their new album  A Compulsion For Propulsion, their follow up to the 2016 LP Attack, featuring no fewer than 15 sharp, Krautrock, garage tinged, punk, pop classics.

His Latest Apparatus is first out the traps. With a pulsating bass from Sean, and simple Farfisa riff from singer/organist Spacy to open, it rattles along at a frantic pace. There's hints of Neu, Stereolab and Inspiral Carpets too. What a start! Monk On follows, sounding like the title of a Fall song, it doesn't outstay it's welcome, clocking in well under two minutes. Similarly, The Human Stupid has hints of Mark E Smith and John Cooper Clark from front man Spacy.  This is truly a glorious collection of nuggets and Medication has the sound of a vintage Inspiral Carpets demo. Dwam slows things down a little and is more psychedelic than its predecessors. If A Compulsion For Propulsion was a vinyl issue, then the band say that this would end side one!

E is For Engine sees some great guitar work from Richard and is an excellent opener for side two. More rock n roll this time, demonstrating the versatility of 3D Tanx. For me, it's the pick of the album.  Tramp Ramblin' sees them return to more familiar territory and is another of those breakneck speed punk classics. Many songs presented here like Uneven Stevens and Spiderman Pinball have me reaching for the repeat button. There's yet more diversity with the funky swagger of Backseat Driver. And so, 'side 2' finishes like 'side 1' - with a departure, and the longer sci-fi jam of Racing Car #9.

With its crisp production, in A Compulsion For Propulsion, Three Dimensional Tanx have created a timeless collection of perfect tunes to enjoy this summer and beyond. They've captured the spirit and the energy of their live shows and we look forward to seeing them again.

A Compulsion For Propulsion is available digitally and on CD from their Bandcamp store and from other retailers.