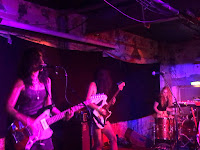 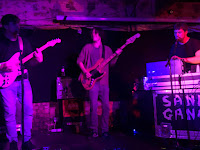 LA Witch brought their self-titled debut album and some new material to a baking hot Soup Kitchen basement on Wednesday night. The three-piece's raw and exciting sound, with the three of them lined up across the stage, replicated the energy of the album perfectly. Support came from Mossley's own Afghan Sand Gang.

Their Machine Music EP has set Afghan Sand Gang apart from many of their guitar-heavy contemporaries on the Manchester scene at the moment. The likes of Mantra and Descension still possess that electronic underbelly of the record, but they're fleshed out by live guitar and bass once they overcome initial technical problems. There's no big stage movements or show in what Afghan Sand Gang do live, they let their music do their talking for them with Matthew's box of synth tricks and their shared vocals drawing in a curious audience who, with only a couple of exceptions, seem to know little of them in advance. By the end though, the crowd has grown and they get a great response as the set closes on a band that's not playing by the usual rules of battle. 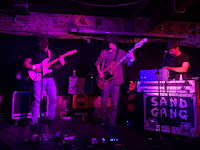 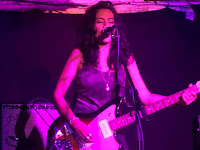 Like Afghan Sand Gang, but with a very different style, L.A. Witch let their music do their talking. Starting with a instrumental intro to opening song You Love Nothing, they're an old fashioned rock and roll band in the sense that you can hear absolutely everything that's been played from Ellie's primal drums that provide the centrifugal force of much of the fourteen song set, Irita's often spindly bass and Sade's guitar which one minute is reserved, the next minute lets loose, with a tonne of reverb never to far away in the mix. They're not into big spectacular statements although some of the songs do start with elongated intros that show off their prowess, but let their music do their talking for them to the mixed age and sex crowd, whether it be the dark gothic sounding moments like Kill My Baby Tonight or those when they create something a little more seductive, hitting touchpoints along the hereditary line between the likes of Breeders and Mazzy Star.

The set covers all of the debut album as you'd expect as well as four additional songs played together mid-set, including Sexorexia and a so new it's still untitled one that suggest they're not going to rest on their laurels nine months after the album's release. They don't say a great deal throughout, Irita talking occasionally between songs early on and Sade talking only towards the end as they politely answer questions like "where are you from?" shouted repeatedly by a guy who probably still thinks he was funny. As the set builds towards its conclusion, they finish the main set with the album's final two songs Get Lost and Good Guys where they start to really let loose and the front rows of the crowd join them. An encore is demanded and we get the one remaining song off the album, Feel Alright, as their final track before they leave us.

Afghan Sand Gang are on Facebook and Twitter. They support The Rhythm Method at Manchester Jimmy's (July 28) and headline The Golden Lion in Todmorden on August 10.