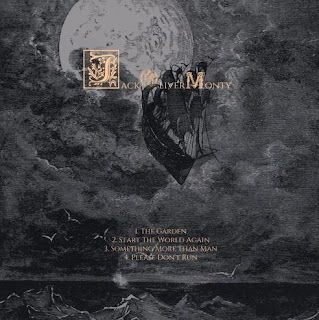 Jack Oliver Monty recently released a single The Garden. Julia Grantham takes a listen to the track and three others that he's put out as a taster for new music next year.

When friends get in touch asking for reviews of their music, I rarely say no. If I’m busy it just might need to wait. Some gigs I simply have to miss, some I attend, and sometimes music gets put aside for a while. But it doesn’t leave me. That is, the music I’ve liked, or love, or listen to often, and so I made the time to review this for my friend. Aside from an interview that’s been scheduled in my diary for months, this is the last review I’ll be writing this year, I think. So here it is: my thoughts on a collection of songs that my friend, Jack, wrote.

I think Jack once told me his solo work is often “shrouded in accidental mystery”. Perhaps this was meant to be a dry joke, and more that his own musical endeavours are lesser known than that of the many bands he is / has been a part of. However, I’d say the same could be said of his music, itself. His own songs are of an entirely different genre to say, ‘Ethan and The Reformation’ of which he is a member, and yet perhaps that just showcases his adaptability as well as his wide- ranging taste in music. And although he described himself as a “nobody” in a previous interview I conducted with him at the start of 2018, he also gathers large crowds when he plays on his own at times: his single launch evening back in September of The Garden being one such example.

The Garden opens on a very positive note, in a major key, describing a hazy memory I would say. Spring or Summer probably. The past tense is used to provide imagery of an idyllic memory of childhood I think. It’s very lovely. The first song Jack ever sent me had a similar feel: his music is calming and meditative. As the story in the song unfolds, the garden disappears and the lack of it is felt. I think the whole track works as a metaphor for looking back on what was taken from you, or lost, and the impact than can have. Or simply just missing something good, and how it feels to be apart from it. Nevertheless, the melody is persistent and uplifting: quite an interesting juxtaposition.

Start The World Again seems to be more satirical in nature or maybe just a slice of social commentary. I’m not quite sure. I once told Jack that as a musician he was something of an enigma to me, and I think this song is ambiguous in nature, mostly because of the uncertainty it describes. It seems to be enveloped in the mystery of how people behave and why; is their hand forced? It’s quite clever actually and the instrumentation is more folk than Jack’s recent single: The Garden. I love the Nick Drake inspired instrumental interlude too. ‘Misty is the evening churchyard’ was always my favourite line in this song, it makes me think of a scene in a gothic film, not being able to find your way in or out of a place and yet it’s a beautiful image: a church at night covered in mist, it seems very peaceful, somehow.

Something More Than Man was new to me up until a few days ago. It’s one of those: it made me cry. I don’t really know what to say about it if I’m honest, but I’ll try. It’s the longest song on the demo and seems to be the most purposeful. I think it’s the most heartfelt, poignant, track I’m discussing here and as such it ebbs and flows like phrases of poetry. The musical phrasing changes throughout. The first verse is the closest thing to a standard singer-songwriter construct with this selection of songs, and yet throughout the rest of the song we are treated to swirling Bowie-esque sequences for the first bridge and key change, as it take us on a journey of self-doubt: existential almost, and it then brings it back to the individual, by describing that feeling everyone can identify with at times in life: “I’m not sure I’ve done the right thing here”. The defiance in Jack’s music lies in the repetition of his lyrics. “You’ve been gone for a life-time” is one such example of this, here. If a song repeats the same words again and again to emphasise a point, then the instrumentation needs to be clever and sophisticated to make it work. I wouldn’t necessarily use those words alone to describe this song. I don’t really know what else to say about it. It’s perhaps one of the best songs I’ve heard this year.

Please Don’t Run was always my favourite track. I don’t have one anymore, it’s too hard to choose, but this one stood out for me as it appears to be the most personal, or a least transparent with little ambiguity. It’s a love song: a song about a former relationship, looking back and wishing you could have done this or that differently. It’s classic in the one sense of being a song of heartache and yet for me, it’s unique because it’s crying out for the other side of the story. All the best songwriters, in my opinion, have an uncanny knack for making you picture, visualise and imagine what their songs are about; what they mean to you personally, how you identify with a particular song, but here, also, the tale in this track is recounted so eloquently, it immediately made me imagine who the other person could be, and I’ve always pictured it as a duet. It’s beautiful.

If you’re reading this, and then subsequently listen to the tracks as posted above, I’d highly recommend seeing Jack perform, live. As a solo artist quietly creating new music, I believe he is planning exciting steps up in his career in 2019. Did you hear that first, here?