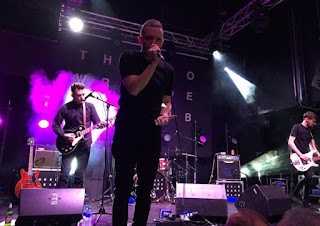 The first live outing since announcing their full time status and big UK tour sees The Slow Readers Club in fine form, as they storm through a massive twenty-song set to a jubilant, sell out, Glasgow crowd.

The Slow Readers Club are ending their most successful year on a high – a top twenty album, well received festival slots at home and abroad, and now a mini tour which cumulates in the massive Manchester Apollo show next weekend. Before that though, they have sell out dates in Glasgow and London to attend to.

It's three and a half years since The Slow Readers Club first ventured north to play in Glasgow. On a spring evening in 2015, they debuted - to a select Glasgow audience - songs from the then unreleased second album Cavalcade in the basement of nearby Stereo. Since then, those songs have been enthralling audiences the length and breadth of the country and beyond, whilst the fan base has multiplied. So much so, that the band are now capable of selling out some of the country's premier venues. On paper at least, it looks like tonight is a warm up for the Manchester Apollo show but as always, the band don't treat it as such and deliver an incredible set, drawing on early classics like Sirens, Feet on Fire, One More Minute and coming bang up to date with no fewer than nine cuts from Build A Tower. 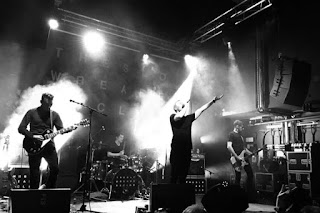 Opening with the frantic Lunatic, band and crowd are straight out the traps and firing on all cylinders. It's an anthemic and triumphant opening and the cheers that greet it as it draws to a close say it all. Fool For Your Philosophy is even better than the opener – if anything, it has grown and matured in stature. A staple of the live set for five years or so now, it is more pulsating and powerful than ever. Supernatural sees Aaron Starkie owning the stage whilst the capacity crowd sing along with every word. There's no let up in the pace, and the big hitters just keep coming with debut single Sirens following. Few, if any bands seem to have as much depth as The Slow Readers Club as this opening demonstrates. New and old tunes mix together seamlessly. Before the next tune, Aaron pauses to compliment a fan who has taken to wearing only his new Readers bobble hat and dispensing with his shirt!

Lives Never Known slows the pace down before a beautiful Never Said I Was The Only One. Like a companion piece to Days Like This Will Break Your Heart – my favourite tune – the band retain the knack of making sad songs uplifting. Through The Shadows doesn't have the same emotive impact that Never Said. However, that's not to say that it isn't as appreciated as it is, and even sees the crowd chanting midway through. “You can dance again now” announces Aaron as the band launch into Lost Boys, with the uber-cool Kurtis taking over on lead vocals. It's great to see that the older songs are still retained in the set and the crowd can have few, if any complaints about the set list. Aaron takes over again on Start Again. With David Whitworth's precision drumming and Kurtis's sci-fi riffs, it is one of the set highlights.

You Opened Up My Heart is worthy of the entry price alone. For me, the stand out track from this year's Build A Tower album. Kurt's simple, repetitive, 60's influenced riff perpetuates whilst Aaron's vocals are delivered with an incredible passion. It demonstrates that as songwriters,The Slow Readers Club are up there with the best of them; you can make comparisons with our greatest ever bands such as The Smiths and Joy Division. You Opened Up My Heart is sequenced together with Plant The Seed, which sees Jim Ryan's bass dominating. Not Afraid of The Dark sounds more menacing and immediate live than on record, as do Block Out The Sun, One More Minute and Feet On Fire – these early tunes have always been firm favourites with the band and their fans and they retain their places in the set list. As the band have grown in confidence and stature, so too have these early classics. One More Minute and Feet On Fire in particular have the same anthem qualities as their younger counterparts.

Forever In Your Debt was for a while around the time of its release the stand out track of a Readers set list and often the highlight of shows. It still is. 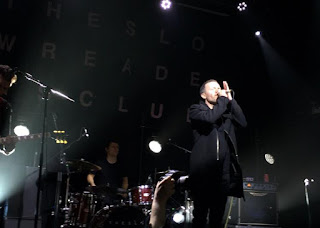 The set proper draws to a close with Aaron thanking locals and travelling fans alike and comments on the forthcoming thirty-two date tour which sees the band give up their day jobs, which will see them play “in more intimate circumstances” and launching into one that they haven't played for a while, Know The Day Will Come. The closing track on Cavalcade, it is the perfect end to the set – a big, powerful, emotive end.

Once the band have left the stage, the crowd begin singing the riff of On The TV. Not since The Stone Roses have an audience “sung” the guitar parts quite like this. I'm sure this isn't lost on Roses fan Kurtis. “We'll get to that one later” announces Aaron but not before the delicate, precious Lost In Your Gaze which gets its live debut tonight. Feet On Fire shifts the encore up another level before  fan favourite I Saw A Ghost. On The TV draws the show to a close. It sees the biggest celebration of the ninety minute show - band and audience become united as one. It's rare to witness such a spectacular bond between a band and their audience. The loyal Readers fan base love every minute as do the band yet nothing is contrived. Instead there is just a mutual love and respect.

The sound and visuals tonight are spectacular, thanks in part to Readers producer Phil Bullyment manning the desk. The band were flawless and as 2018 draws to a close, we can't wait to see what happens next. There's just the small matter of a sell out London show and the one we have all been waiting for – The Manchester Apollo – to go first.