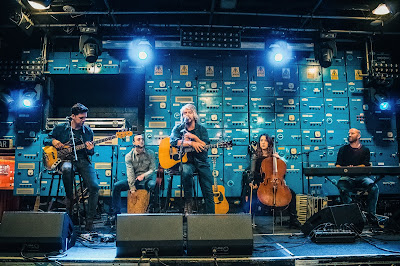 John Bramwell brought his Full Harmonic Convergence project to the intimate surroundings of Gorilla for a sold-out show where he unveiled tracks from his forthcoming second solo album The Light Fantastic as well as from his debut Leave Alone The Empty Spaces and some I Am Kloot classics in a two-hour set that held an attentive audience rapt in both his music and his stories around them.

It's always a difficult thing for a front man or woman to make the break from the band from which they are known and to branch out with new material. The associations and expectations often weigh heavily, the more casual fans that fill venues lose interest particularly if the statements about new material are strong ones and you sense people are just waiting for the inevitable encore of the old favourites. It always comes as a surprise when the reality confounds that all-too-common scenario, but for two hours on Thursday night, John Bramwell got that balance spot-on, the audience listened intently to the new material, partly down to the fact it's some of his strongest work, joined in the between song chat and sung heartily to the older songs. In a gig-going environment that's increasingly being polluted by idiots talking all the way through the show, it was a beautiful moment to witness a brand new song played for the first time ever to an audience being greeted by a universal respectful silence.

John sets his stall out early, opening with World Full Of Flowers, a song from the forthcoming record, a wistful daydream about escaping to a better place declaring "want to run where the sunset breaks, make beauty for its own sake" with the band that John's drawn together - Dave Fidler on guitars, Andy Fidler on cajon, Harriet Bradshaw on cello and Alan Lowles on keyboards - complementing the  mood of the songs. Another brand new song called I Am The Sky follows, so new that John had only recently finished the lyrics and jokingly tells an audience member they can't have them because they're not copyrighted, a little more dramatic in its intent, cutting through the humid Gorilla air.

Time's Arrow was one of the lead tracks from John's recent solo album Leave Alone The Empty Spaces, and the juxtaposition of the keys and cello make it feel even richer and more yearning than ever. John then introduces the band, laughing that he's never been quite so showbiz, before then realising that the whole band don't play on the next song before engaging in conversation with the audience. It's this engagement that helps makes each of these shows so entertaining, on top of the performance, even allowing for John's comment later that people say he tells the same stories at each one. Sat Beneath The Lightning Tree, another from Leave Alone The Empty Spaces, is fragile and tender, accentuated once more by the cello and keys.

Days Go By, another brand new one, might only last less than two minutes, but changes the pace of the set, jumping from a claustrophobic acoustic guitar through a cello section through to a battered romanticism that recalls but never apes his work with I Am Kloot. At the end John jokes he sat for weeks on the sofa, drinking and watching La Vie En Rose before coming up with the song's key line  "hesitate, meditate, turn your mind off and levitate." Element Of Truth sounds like nothing he's done before, half-spoken reflective verses and a gorgeous harmonic chorus with the cello dancing in the background, and at the end he reveals he turned up and told the band this afternoon that he had a new song he wanted to do. The talent of the musicians he's gathered around him means we wouldn't have known had he not made that revelation.

They return to Leave Alone The Empty Spaces for the title track and the lead single Who Is Anybody Anyway? The former is another example of the sparse nature of the songs from that record, a lengthy opening acoustic guitar section ushering it in, the space afforded by the instrumentation (and the audience's listening) allowing us to hear the world-weary tones in John's voice as he recants the story's tale. The latter is more upbeat, the backing vocals adding lift to the choruses, repeated at the end as the music drops down.

There's then a five song solo section and the few that aren't transfixed by the new material get the reward for their patience and observation of silence. Bigger Wheels, Mouth On Me, Fingerprints and From Your Favourite Sky touch on four of I Am Kloot's albums, stripped down to just John on an acoustic making them arguably more powerful and affecting than the recorded versions and Gorilla's unusually crisp sound gives the songs an edge that has the hairs on the back of our neck standing up. Interspersed in the middle of them is the final track on Leave Alone The Empty Spaces, the plaintive Meet Me At The Station, one of the best things John's ever written in his thirty-five years. He credits it to his dog Henry beaming it to him at a train station before there's a comedic interlude as he mishears an audience comment about Kings Of Leon as he quips that Henry doesn't come to his gigs, but loves going to others. This ad-libbed humour might not be polished, but we need musicians with a personality and a sense of humour more than we need scripts and bland platitudes.

The band gradually rejoin as the set progresses. I Still Do sees him accompanied by Alan and the stripped-back arrangement of just guitar and keys makes every note and word feel more poignant and you can almost feel the reverence coming from the crowd who stare at the stage, listening acutely. To The Brink is introduced as being about "drinking and disaster" and John jokes with someone in the front row that they look relieved that they can sing along to this one although being out of tune makes them artistically correct as the cello and accordion provide the encouragement for the crowd to sing. Avenue Of Hope follows, a rare appearance for the I Am Kloot song that John tells us includes lyrics he found on the wall of the Temple Of Convenience bar just round the corner. Like Bullets, 86 TVs and in particular a tear-inducing The Same Deep Water As Me that follow it, it's never sounded richer, more emotionally taut as it does with this instrumentation behind it.

The full band return, John jokes he doesn't know much of the next song so the others don't have much chance. But Working My Mind Off is a real triumph despite that, sounding effortless in its construction, but the sort of the song that will have you singing along the chorus or the hook line involuntarily and wondering just why. From The Shore has John asking us if we can mimic the seagull sounds he recorded for the version on Leave Alone The Empty Spaces at the end, telling us we sound like eagles, crows or dolphins mixed with parakeets. The laughter turns to silence as they start to play. Stepping Stones is another and the last of the brand new songs, urgent verses into choruses laden with vocal harmonies without diverting too far from John's ability to craft memorable moments.

It's back to the singalong as the audience let go of any pent up desire to sing as Northern Skies reaches its chorus and breakdown. As six hundred people are joined as one bellowing the "na na na na na" section of a song that reflects on the unique beauty of living in these parts, it feels like a coming together, audience telling the band that they've been listening, the band allowing the audience to take the moment. It's beautiful.

There's a setlist change as an audience member shouts for The Whipperwill from Leave Alone The Empty Spaces and John obliges after throwing a few glances at his band mates. It's a calm between two storms as they finish on a raucous Proof that sees the audience once again take charge and drown out John as the song progresses.

In a world that's being increasingly infected by gig-talkers, tonight's show was a rare pleasurable experience, made even more surprising by the plethora of new or recently released songs rather than old classics and favourites. That this indulgence felt like nothing of the sort was down to both the audience themselves - "the most beautiful audience in the world" as John calls them after one moment of attention - but mostly to the quality of the new material and the camaraderie and connections up on stage. Leave Alone The Empty Spaces and the tracks from The Light Fantastic that are previewed tonight stand up against anything John has released before.