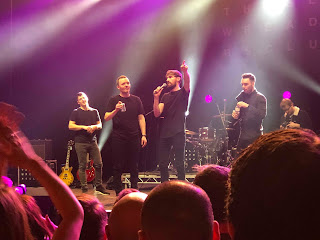 The sold-out signs for The Slow Readers Club’s biggest headline show to date went up three months ago. Their journey has been one of the most heartwarming and well-deserved rises to the top, one that’s been achieved with a humility and a connection to their fanbase that’s rarely witnessed these days. Tonight was an indisputable triumph, three and a half thousand devotees joined in unison to hail the victory of the underdog and witness a performance that made even this hallowed hall feel like a stopping off point on a ride to somewhere even grander. With PINS and LIINES on the bill it felt like the underground scene in Manchester has risen again.

Four years ago, we reviewed two shows within a week of each other. The Slow Readers Club, fresh off the back of some national airplay on XFM, headlined one of that station’s club nights at Band On The Wall. At best fifty people turned up and it felt like a kick in the nuts both for them and those that championed the band, one of those moments where they must have thought whether it was worth it all. A week or so later, we stumbled into a fanzine launch in Gullivers, just round the corner, and found LIINES, playing to an audience you could count on your hands early on a Sunday evening. Within thirty seconds we were hooked. Fast forward to tonight and the most iconic venue in Manchester is full and here for them. It’s a proud moment for two wonderful bands who deserve every little bit of success they’ve now got, payback for all those nights where they wondered if they would ever get that break that their music and their approach to it undoubtedly deserved.

LIINES open up proceedings and there’s already a healthy crowd assembled. They start with a new song called On And On, but the set is mostly made up of tracks from their wonderful debut album Stop / Start which has got them the attention of Sleaford Mods and a personal invite to support on their huge thirty-two date tour next year. Hopefully that will prove to be their “James” moment that catapulted tonight’s headliners to a wider audience that was unable to resist their charms. 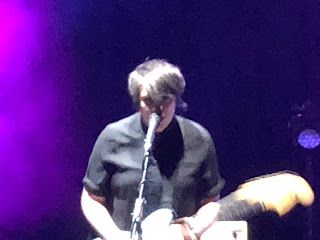 It’s strange seeing Zoe, Leila and Tamsin quite so far apart, and despite them not being turned up loud enough, the growing crowd give them a rapturous deserved reception. The double blast of Disappear and Be Here mid-set are the type of songs that music lovers gush about - if they ever get to hear them - whilst Never There has never quite sounded so glorious as it does in this huge hallowed room. Zoe doesn't seem to quite believe that they're up there on that stage, but it's that modesty that makes the crowd warm to them. 2019 promises to be a big year for them and with it further proof that substance can win through over (questionable) style, music and the ability to craft a song above creating a sound or a vibe. LIINES are a proper band for music lovers and we love them.

PINS have been around for what seems like an eternity, with two great albums Girls Like Us and Wild Nights under their belt. In the year since we last saw them they’ve undergone a radical transformation. They’re down to three core members - Faith, Lois and Kyogen - accompanied by two vocalists and a new drummer - and their set is completely new material. It’s a brave move, but one that shows that they refuse to rest on their laurels and have a steadfast belief that, like the headliners, their day will come. 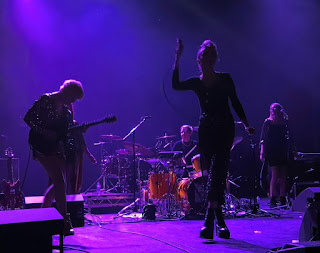 The new songs are even more direct than their predecessors, powerful angular statements of intent, warning that they’re not women to be messed with. Having five of them singing at points simply underlines that point. One minute they’re at your throat, the next soothing you with harmonies creating an edgy uncertainty that a lot of the best music possesses. They sing about being a woman in the world and an ordinary girl in one song, whilst in another they recall tales of being out all night. They succeed in being both uncompromising but accessible at the same time and the now full crowd give them the reception they deserve.

Without any disrespect to LIINES and PINS this is The Slow Readers Club’s night. It’s a triumph of the power of music, the ability of word of mouth to create a buzz, a momentum that becomes unstoppable. They will have stood in this room watching their musical heroes get the sort of reception that’s reserved for them tonight. READERS chants threaten to deafen everyone in range before they even make it on to the stage and get louder as the night progresses. Gentlemen who should not be crowdsurfing are hoisted aloft involuntarily by their mates and sent crashing down to earth as three and a half thousand people focus on four men on the stage and the seemingly endless procession of life-affirming anthems that they have at their disposal.

The first of those is Lunatic, the opening track of this year’s top twenty album Build A Tower, of which we get nine of the ten tracks. As it reaches the line where Aaron raises his arm and proclaims “build a tower, hundred stories high” and the audience respond by doing exactly the same, the sense of communion and connection sends a shiver down the spine. It’s that which encapsulates the reason why The Slow Readers Club have captured so many hearts, so many minds, why strangers sing eyeball to eyeball and then embrace. 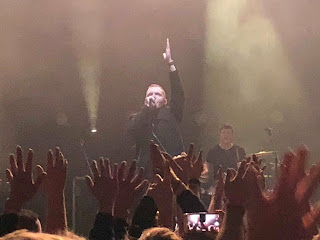 The set draws from all three of their albums, seamlessly moving from the likes of Supernatural and Not Afraid Of The Dark through Forever In Your Debt and Plant The Seed to the likes of Sirens, Block Out The Sun, Feet On Fire, Lost Boys and One More Minute from their self-titled debut. That those five songs from a seven-year old album that was only released on mail order and at shows can be sung back with such gusto and with the intensity of the more recent favourites is testament to just how The Slow Readers Club have managed to inspire devotion in their fanbase at levels that more established and better known bands would kill for. One More Minute is even older, harking back to the mid 2000s days of Omerta, yet feels like it’s a song made for the here and now, its message of “stop right now for one more minute, I’m not sure that I want in it” feeling quite apposite in these troubled times.

The adulation they get at the end of each song, or when Aaron comes down to the barrier to be met with a sea of arms, or Kurtis takes on lead vocals on Lost Boys, is a phenomenal confirmation of what the Readers have achieved in the past few years. We always knew they had the potential, the power and the songs to play venues like this, but we’re not sure we ever believed it would happen quite like this. The Apollo was a destination at the end, a target, now it feels like a stopping off point.

You Opened Up My Heart is a glorious uplifting moment, people making them hoarse echoing Aaron’s proclamation to “believe enough to lose control, where there’s love there’s always hope” whilst Forever In Your Debt, one of the most affecting love songs we’ve ever heard, turning the self-doubt of the verses in a glorious celebration in the chorus. I Saw A Ghost does similar, moments of darkness spun on their head to declare that everything will be alright in the end, a celebration of being different and it’s OK to not be OK all the time. Here, The Slow Readers Club confirm their place in the pantheon of Manchester bands that have done just that alongside Joy Division, The Smiths, James and Elbow. That might appear like hyperbole, but stand in the middle of a crowd at a show like this and you’ll be convinced too. 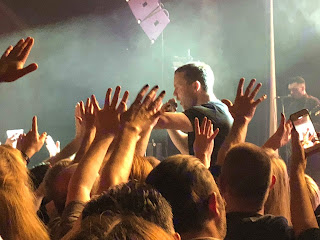 They finish the night with a raucous On The TV, the song that should be cemented on national radio A lists at this moment in time. Its irresistible hook is sung back at volumes that threaten to drown out what’s happening on stage. When the band stop playing, the roars are replaced by that hook line and the band start back up as Aaron surveys the mass of heaving bodies in front of him.

As is tradition at the end of these big shows, Jim grabs the mic. He tells us that all three and half thousand of us should go out and bring a friend next time as they embark on their thirty-two date tour next year and go full-time. He doesn’t really need to say it, because that’s one of the reasons we’re in this room tonight. They’re here without a machine behind them, growing organically, through people excitedly telling their friends about this amazing band they’ve discovered. Even the breaks they got, like with James, came through that sharing of the love. 2019 promises to even more exciting still.

There’s no gimmicks with The Slow Readers Club, just beautiful music that talks to people, shares experiences and makes it feel like it was written about you. There’s a whole music scene in Manchester cheering them on, representing us all, showing that this incredible journey they’re on can be achieved through the basics of hard work, a humble attitude of nothing being given as a right, belief in the music and of course the songs themselves. Their story is a shining beacon of light that good will prevail in these awful times that we live in.

LIINES' official website can be found here.  They are also on Twitter, Facebook and Soundcloud. We interviewed them back in July - read it here. They support Sleaford Mods on a massive thirty-two date tour in March through May before headlining three shows of their own at London Thousand Island (May 30), Nottingham Bodega (31) and Manchester Yes (June 1).