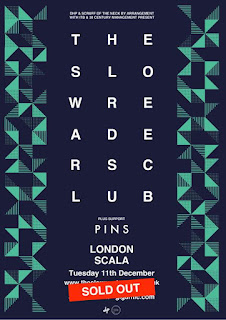 Last night saw The Slow Readers Club back in the big smoke for the second time this year, and the fourth time since Clive Lambert has been following them and he reports back from their sold-out show at Scala. As Aaron Starkie the lead singer said on stage last night “This is the biggest crowd we’ve played in front of in London” to which I retorted “You always say that!”.  That’s music to my ears as a fan of this great (but sadly underfollowed) band.

When the Readers come “darn sarf” it feels like a treat for us lot, and we come from far and wide. I didn’t get there until quite late yesterday so missed the support act and can’t comment on that I’m afraid.

But come 9pm and the familiar sound of “I Feel Love” by Donna Summer filled the tight venue that is the Scala (possibly chosen by the band so they had a 2 minute walk to get their train?!). I love this place. There really isn’t a bad spot in the house. And SRC filled it; the fans and the sound!

First up was Lunatic followed swiftly by Supernatural and one of my favourites from the first album (so doesn’t often get a run out these days); Sirens. Solid start and the boys looked like they were enjoying themselves. In fact no, they looked like they were bossing it, and were happy to be doing so. There is a real humility about this band and while it’s endearing I am pleased to report that last night they stood up there with a bit more swagger. Maybe going full time, the plan for 2019, has finally made the four of them realise they can stand up there and OWN IT. I welcome this slight change of attitude and think it adds to the performance.

I took a watching brief for the first six or seven songs then decided to “dive in” and get a closer look. This is when you start to bump into people that you know, but don’t know. SRC have a Fan page on Facebook and a lot of people have got to know each other in the last few years through this. I had a dozen or so people, some of whom I’ve never met, come up to me last night, give me a hug or a high five and say “Alright Clive!”. Love it!

Fast forward to the second half of the set and top tunes like Block Out The Sun and Forever In Your Debt are being confidently smashed out by a band on top form, accompanied by an excellent light show and greeted by a damn good sing-along from an increasingly sweaty and warm crowd!
The night finished with the band’s latest single On the TV which has fast become a fans favourite, to the point where even after it’s finished the crowd keep singing the guitar riff, until the band have to come back with a short reprise. Great moments always, reminiscent for me of the sort of thing that goes on at a Depeche Mode concert (albeit Mode are usually in Stadiums these days!).

Gig over and we troop home, saying goodbye to new friends on the way out. I am a lucky lad in that I’m heading up to Manchester on Friday for the Apollo gig, another chance to see the band and the Readers family. And each gig is different… I’m sure Friday will be as epic as one of my Readers mates has suggested. Last night was best described as “sweaty” from my point of view, but also another night that proves the Slow Readers Club are fast becoming a live act that people shouldn’t miss.

Roll on Friday, then roll on April when they come visit my local music venue in (hopefully sunny) Southend-on-Sea. As always we will do our best to give everyone a “proper” welcome and prove that we’re not all grumpy down south!