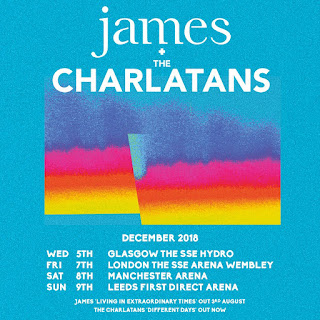 James and The Charlatans opened up their four-date UK tour in the cavernous surroundings of the Hydro in Glasgow. Both bands delivered sets that gave much to both the casual fan with selections of their best known songs as well as material from their most recent exciting albums Living In Extraordinary Times and Different Days.

Whilst hardcore fans may argue of the merits of line-ups on these dual header tours, the bands are far less parochial about such matters and get on with the important business of delivering a memorable set for the fans. The Charlatans, and Tim Burgess in particular, treat this as if it's their own show and there's thousands in front of them who spend the hour of their set as if it is exactly that. Tim punches the air, comes down on the front extension of the stage and exhorts us to lose ourselves in the music his mates are creating.

Like James who follow, they have a real belief that the new material they've been producing is of at least equal standing to the classics that benefit from the comfort blanket of recognition. And like James it's a belief that's well founded. They start with Total Eclipsing, from their recent add-on EP to their last album Different Days and mid-set they take us through a duo of tracks from that album - the title track which leads into, via spoken word samples, into its lead single Plastic Machinery.

The rest of the set takes us on a journey through most of their career to date. There's plenty of the big hits you'd expect from their early to mid-nineties commercial peak - from The Only One I Know, Weirdo, One To Another, North Country Boy and Tellin' Stories - as well as the likes of You're So Pretty We're So Pretty (from Wonderland) and Impossible (from Us And Us Only) to complete most of the circle through their impressive nigh-on three decades of existence. It reminds us that whilst they were never the most in-vogue of the bands from whichever movement they were lumped into, they were ones of the ones that had longevity by remaining true to themselves and letting their music take them and us on the journey and it's why they're still here.

Tim Booth later describes this event as being about the whole evening and the lovely vibe that The Charlatans create and as the final bars of Sproston Green, their eternal au revoir at the end of their hour, bounce off the Hydro's cavernous and not always gig-friendly walls having taken us on a meandering twisting country road like the lanes into the Cheshire village that gives the song its name,  the crowd acknowledge a band that generates so much goodwill and affection and is still finding ways to keep themselves at the top of their game.

That's one of the reasons James are still as vital as ever too. They've now been back together since their 2007 reunion as long as the period from their breakthrough with Gold Mother in 1990 to their departure with Pleased To Meet You in 2001 and have been more active in this period too. They're fiercely proud of their latest record Living In Extraordinary Times, another top ten success, and rightly so. The six songs they perform from it tonight are amongst the strongest in the set, even if chunks of the Glasgow crowd away from the front rows seem solely interested in the big hitters of those halcyon days.

They kick off with two - the album's opening track Hank and the glorious Picture Of This Place, one of those journey songs that James excel at where they've taken so many ideas from their jams and pieced them into a mazy winding ride for the listener. Hank's tribal rhythms are beaten out by most of the band on drums and the whole set, including many of the old favourites, are beefed up from a percussion perspective, testament to the recording methods of the new record influencing their treatment of the more familiar. Even sound troubles, with a booming bass that threatens to but doesn't quite overwhelm the rest out front and what looks like on-stage issues too, can't derail the energy on stage, added to by the additional percussion, backing vocals and stage presence of newcomer Chloe, who's replaced her friend Debbie after the May tour and summer dates.

Whether it's to ease Saul back in gently after his absence for the Southern Hemisphere shows or an attempt to get the more hits-hungry elements of the crowd to indulge them, the setlist feels like they've hit a win-win for both sides. There's nothing post-reformation other than the Extraordinary Times songs and a string of their best loved tracks, three of which follow on from the two openers.

Waltzing Along is the first of them and has Tim down on the barrier, stood above the crowd, contemplating whether to thrust himself into the bear pit of the front rows. He ends up half submitting, half falling in involuntarily at the end. Back up on stage, he's eyeball to eyeball with Saul for a firecracker Tomorrow where you can feel as well as hear the influence of the new tracks and new ideas infiltrating old favourites and injecting them with a new lease of life and love. Sit Down follows with no fanfare, no big statement and gets a rapturous response, even when Tim sidetracks the singalong by reverting back to lyrics from the Rough Trade version of the song in one of the verses.

What's It All About is introduced as a "trippy one" as they go back to Extraordinary Times with two more tracks from their most recent record. Clocking in at somewhere near eight minutes, it's a song that takes us down many paths, opening new doors into new zones of the James sonic maze whereas the drums return for a brutal assault on Heads, an angry attack on modern day America with the stage lit in bright white light which matched the metallic rage of the song.

It's followed by Stutter, one of the band's earliest songs, although you'd be hard-pressed to determine that it's not from their most recent batch of songs without DNA testing. It's similarly brutal, to the point where Tim stands in awe of what's gone on around him and a broad grin cracks his face on the big screen as the cacophony of sound creates mayhem around him. It drops down into Out To Get You, which gets cheers of recognition from the Glasgow crowd whose attempts to sing it back threaten to drown out the band. Saul's violin breaks causing them to take the song down a different route, improvising their way out of the malfunction of a major piece of equipment for this song, something Tim doesn't realise at first until he's told. In that moment the very core of James is revealed, their intuitive ability to react to a situation, to each other and to do it together as a unit.

Just Like Fred Astaire is stripped down and sung back with gusto, again threatening to drown out the band and the delicacies of this alternative treatment of a crowd favourite. Leviathan is even more glorious live as it is on record, that build into the chorus more explosive, the drop down into the "ride inside your starship" line more pronounced as the stunning lights help accentuate the impact.

How Was It For You is stripped down and slowed down even more from the versions they've performed on recent tours and for me doesn't quite work in this format as the energy that drives the song along as one of their more straight-forward songs has been dissipated. As Tim comes out to the crowd again though, no one else seems to mind.  Sound is a winding long road of a song, Andy's triumphant trumpet call to arms bouncing off the walls as he prowls the walkway in front of the stage as Tim exhorts us all to do something out of character. They finish the main set, "because we need that little gap", with a bouncing Come Home that has the whole place leaping around like salmon.

The encore starts with Many Faces, which Tim declares is about not getting frightened by the differences that we see between us. The singalong of the chorus at the end doesn't quite catch on where we're stood, which is a shame as it clearly has closer to the front. They respond though to Getting Away With It (All Messed Up) which sees Tim out off the stage and down with his devoted fans who seem to have adopted this as their anthem and the night's closing song Sometimes which seems to steadfastly refuse to budge from this position against all comers.

It's an uplifting way to end the first night of this mini tour with a setlist that had something for everyone. Whilst there's no huge curveballs or resurrection of a long-lost favourite, that was eschewed tonight in favour of the rightful focus on Living In Extraordinary Times as well as the cognisance that they're playing to thousands who wouldn't necessarily know those songs. It's a balance that they get just about right and send the crowds flocking out into the wet cold Glasgow air buzzing.

Email ThisBlogThis!Share to TwitterShare to FacebookShare to Pinterest
Labels: James, The Charlatans